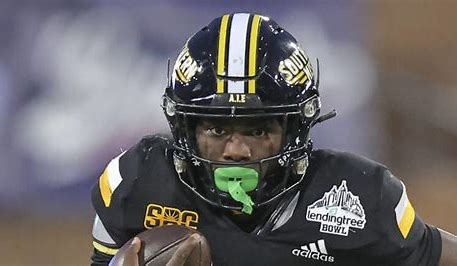 USM RB Frank Gore, Jr. was a warrior on the gridiron in 2022, both running the ball and throwing it. In the dictionary next to the word “Super Back”, there is Gore’s picture.

At times during the season, Gore lined up under (or behind) the center as the “Super Back”. It was either out of necessity or by design. Either way, he got the job done when needed.

Gore passed for two touchdowns (in 2 attempts) in a 39-24 win over La-Lafayette. He threw a TD pass in a 27-20 loss to South Alabama and also tossed a scoring pass in the 38-24 win over Rice in the Lending Tree Bowl.

On the season, Gore completed 8 of 15 passes for 191 yards and four touchdowns.

Gore turned in a record-setting performance last Saturday in the Lending Tree Bowl vs Rice, rushing for 329 yards and two TDs. That was an FBS bowl record and a single-game school rushing record. In addition, it was the most rushing yards gained in a game in the FBS in 2022.

Over his final two games combined, Gore averaged almost 12 yards per carry. He finished the season with 1382 yards and 9 touchdowns, averaging six yards per carry over 13 games. Gore rushed for 106 yards per game, good enough for #18 in the country.

He ranked second in the Sun Belt Conference in rushing, behind only Khalan Laborn of Marshall. For his efforts this season, he was named 2nd Team All-Sun Belt.

Gore is a gridiron warrior indeed, helping lead the Golden Eagles to a 7-6 record and their first bowl victory since 2016.