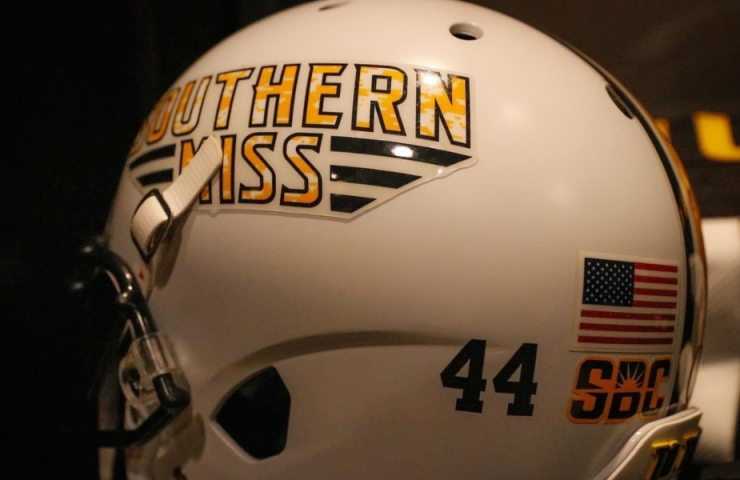 The Southern Miss Golden Eagles (6-6) are going bowling in Year 2 under head coach Will Hall. They will take on the Rice Owls (5-7) at the Lending Tree Bowl in Mobile, AL on Saturday.

Mobile has been kind to Southern Miss over the years, with the Golden Eagles going 2-0 in bowl game appearances there.

The Golden Eagles (9-5) won four of their final five games to earn a berth in the GMAC Bowl in Mobile vs the Ohio Bobcats.

DB James Denley also got in on the action and returned a pick-six 18 yards for a TD.  The Golden Eagle defense forced two turnovers and was led by Gerald McRath, who had 13 tackles and three tackles for loss.

The Mobile, AL Bowl pitted the top two defenses in the country against each other in Southern Miss (8-4) vs TCU (10-1).

The Golden Eagles posted wins over Power Five schools like #15 Alabama (21-0) and Oklahoma State (28-6) that season. They lost their season opener to Tennessee by only three points, then reeled off six wins in a row. Three of their four losses were by 11 points combined (three points to Tennessee, three points to Cincinnati, and five points to East Carolina).

Coming into the bowl game, Southern Miss ranked #2 in total defense (TCU was #1). As one of the stingiest defenses, the Golden Eagles allowed just 17 total TDs and 3.8 yards per play.

TCU was led by RB LaDanian Tomlinson, who rushed for 2158 yards and 22 TDs and finished fourth in the Heisman voting that season.

The Horned Frogs’ defense was the #1 defense in the country, allowing just 245 yards per game. They also ranked #7 in rushing defense, allowing a paltry 84 yards per game on the ground.

But all that changed that cold night in Mobile.

The game was tied 7-7 at halftime. The Southern Miss kicking game was atrocious all night, they missed on four field goals. Tomlinson scored twice in the 3rd quarter to put the Horned Frogs up 21-7.

No Quitting in the 2nd half

In the 3rd quarter, Southern Miss QB Jeff Kelly threw a TD pass to WR LeRoy Handy to cut the TCU lead to 21-14.

The Golden Eagles defense was as advertised, forcing two turnovers, including a 50-yard interception return for a score by DB Leo Barnes in the first half (his fourth return for a TD of the season). Barnes posted six INTs that season.

More importantly, they held Tomlinson and the TCU offense scoreless in the 4th quarter. Kelly hit handy again for a 56-yard score to tie the game at 21-21. The Nasty Bunch was able to partially block a punt and recover the ball at the TCU 43-yard line. As a result, Kelly and the Golden Eagles had excellent field position for the final drive.

On the game-winning drive, Kelly threw two incomplete passes on 1st and 2nd down. Then on 3rd and 10, Kelly was flushed out of the pocket and he ran for a 1st down to stop the clock and get a new set of downs. With just 0:08 left on the clock, Kelly hit WR Kenny Johnson with a 29-yard laser for the game-winning touchdown.

Kelly threw for 159 yards and three TDs. RB Kelby Nance added 104 yards on the ground (158 total rushing yards) against the #1 defense in college football in Y2K.

Tomlison gained 118 yards rushing and scored two TDs. He was later drafted in the 1st round (5th overall) in the 2001 NFL Draft by the San Diego Chargers.

Southern Miss is coming off a 20-10 win over UL-Monroe. Rice is on a 3-game losing streak.

The Golden Eagles have been quarterbacked by a committee all season. Ty Keyes was named the starter prior to the season opener, played in three games, and was lost for the season due to injury.

RB Frank Gore cracked the 1000-yard mark, rushing for 1053 yards and 7 touchdowns. In addition, he saw action at quarterback as well, throwing three TD passes. Gore is coming off a 199-yard effort in the win over UL-Monroe.

Southern Miss has momentum going into this game. Look for the Golden Eagles to give Rice a heavy dose of Gore and the Southern Miss defense to put a stranglehold on the Owls’ offense.

Tony Thomas is a 1995 graduate of Southern Miss and is the owner and operator of www.thegridironnews.com.

One Reply to “Southern Miss Undefeated in Bowl Games in Mobile”