Home » The Streak Is Over: Burrow And Clyde Rob The Tide To Win 46-41 To Keep LSU Unbeaten

The Streak Is Over: Burrow And Clyde Rob The Tide To Win 46-41 To Keep LSU Unbeaten

The #2 LSU Tigers ended an 8-game losing streak to the #3 Alabama Crimson Tide, keeping heavy pressure on QB Tua Tagovailoa and his surgically repaired ankle all game long to secure a hard-fought 46-41 victory in Tuscaloosa on Saturday.

Tua drove the Tide down the field on the opening drive of the game to get inside the 10-yard line, but he fumbled the ball while being flushed from the pocket and LSU recovered to end the threat. LSU then went down and scored to take a 7-0 lead early.

Alabama was held scoreless on their first four possessions. LSU LB Patrick Queen intercepted Tua late in the second quarter, then the Tigers promptly went down and scored again with 0:06 seconds left on the clock to take a 33-13 lead into halftime.

But the Tide came roaring back in the 2nd half and held LSU scoreless in the 3rd quarter and cut into the Tigers lead with RB Najee Harris scoring 2 TDs (1 rushing, 1 receiving), making the score 33-27 at the start of the 4th quarter.

But LSU QB Joe Burrow and RB Clyde Edwards-Helaire willed the Tigers to victory in the final period. 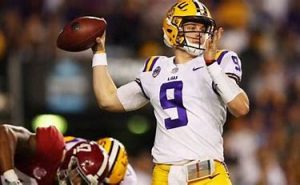 Burrow connected on a screen pass to Edwards-Helaire to convert on 3rd and 10 with 11 minutes left in the 4th quarter to keep a drive alive. Then Burrow ran a quarterback draw play to get down to the 5-yard line. On the next play, Edwards-Helaire performed his spin move flawlessly to go untouched into the endzone to extend the Tigers lead to 39-27. A 2-point conversion attempt failed.

With 6:32 left in the game, Alabama kept fighting as Tua connecting with WR Jerry Jeudy to convert on 4th down and 4 to go at the LSU 13 yard line. Then with 5:32 left Tua threw a 5-yard touchdown to Jeudy cut the lead to 39-34. 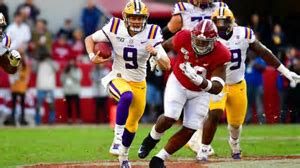 The Tigers responded with Burrow making plays with his arm AND his legs to move the Tigers into the red zone once again, and then Edwards-Helaire scored on a 7-yard run to make the score 46-34.

But the Tide still wasn’t done as Tua, with 1:21 left on the clock, connected with WR Devonta Smith on an 85-yard touchdown pass to cut the lead to 46-41.

The Tigers then made a couple of first downs to run out the clock and leave Tuscaloosa with a much-deserved win and what most certainly should be a #1 ranking in the College Football Playoff Rankings.

Burrow passed for 393 yards and 3 TDs and no interceptions, connecting on 31 of 39 throws and completing 79% of his passes. He also added 64 yards rushing. Burrow was sacked 5 times.

Burrow’s performance further cemented his hold as the front-runner for the Heisman Trophy. He has thrown for 3198 yards and 33 TDs and only 4 INTs this season with 3 games left in the regular season. 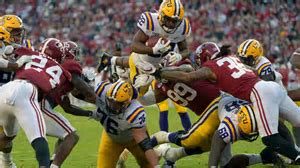 Edwards-Helaire rushed for 103 yards and 3 TDs and caught 9 passes for 77 yards and another TD, and he would not be denied as he carried his team on his back and fought and scrapped for every yard on his way to the endzone and keeping drives alive. WR Ja’Marr Chase led the Tigers with 6 catches for 140 yards. WR Terrence Marshall added 2 catches for 45 yards and a touchdown and WR Justin Jefferson added 7 catches for 79 yards but did not score.

It’s interesting when you compare this year’s game to last year’s game vs Alabama in Baton Rouge:

LSU scored 46 points, gained 559 total yards, 393 passing yards and 166 rushing yards. The Tigers gained 29 first downs. The 46 points by LSU were the most points ever scored against a Nick Saban-coached Alabama team.

The Tigers improved to 9-0 on the season and will take on Ole Miss next week. Alabama drops to 8-1 and will face Mississippi State next week.

Previous ArticleHeroes Walk Through Death Valley on Saturdays
Next ArticleThe Oldest College Football Rivalry In The Deep South: #4 Georgia To Visit Jordan-Hare To Take On #12 Auburn