Home » The Oldest College Football Rivalry In The Deep South: #4 Georgia To Visit Jordan-Hare To Take On #12 Auburn

The Oldest College Football Rivalry In The Deep South: #4 Georgia To Visit Jordan-Hare To Take On #12 Auburn

On Saturday, the #4 Georgia Bulldogs will invade Jordan-Hare Stadium to take on the #12 Auburn Tigers (7-2) in what is the oldest college football rivalry in the deep south. Georgia leads the series 59-56-8.

The Bulldogs (8-1) are the highest-ranked 1-loss team in this week’s College Football Playoff (CFP) rankings, with wins against Notre Dame and Florida on their resume, both ranked in the top 15 at the time. 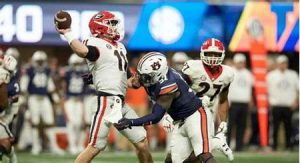 Georgia has a balanced offense, gaining 15 touchdowns through the air and 18 touchdowns on the ground. The leader of the offense is QB Jake Fromm, who has thrown for 1858 yards and 13 TDs and only 3 INTs and is completing 67% of his passes. RB DeAndre Swift is the leading rusher with 921 yards and 7 TDs, but has rushed for over 100 yards in only 3 games this season. 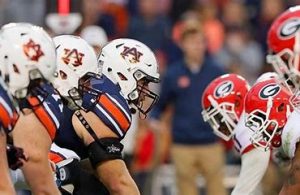 This unit has not allowed a rushing touchdown this season, allows just 2.8 yards per carry and is allowing opponents to score only 10 points per game.

The Bulldog defense has pitched 3 shutouts so far this season, against Arkansas State, Kentucky, and Missouri. In those 3 games, Georgia outscored their opponents 103-0.

Auburn has Top 25 wins over Oregon, currently #6 in the CFP rankings and over Texas A&M, who was ranked #17 at the time.

The Tigers offense has scored 50 or more points three times this season. QB Bo Nix is the starter but hasn’t exactly set the world on fire statistically, with 1798 yards passing, 12 TDs and 6 INTs. 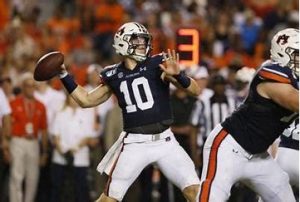 Nix is a true freshman, the first true freshman to start at quarterback for Auburn since the 1940’s, and at times has played like it. He did lead the Tigers in a comeback victory against Oregon in week 1, but Nix has thrown for 3 touchdowns or more in a game only once this season. He is coming off the game last week against Ole Miss in which he threw for 340 yards, but no touchdowns.

The Auburn rushing attack has also been anemic, not scoring a rushing touchdown in 4 games this season and only scoring 5 TDs on the ground total for the year.

The Auburn defense was a unit that was held in high regard at the start of the season and has accounted for 5 interceptions, 23 sacks, and 64 tackles for loss over 9 games.

Last week, the Tigers held Ole Miss scoreless in the 1st and 3rd quarters and limited them to 99 yards passing for the game, but no sacks.

Look for Georgia to get the win in front of the Auburn home crowd because of better quarterback play and a lights out defense.

Previous ArticleThe Streak Is Over: Burrow And Clyde Rob The Tide To Win 46-41 To Keep LSU Unbeaten
Next ArticleTigers and Rebels: 10 Facts To Know About LSU vs Ole Miss Football