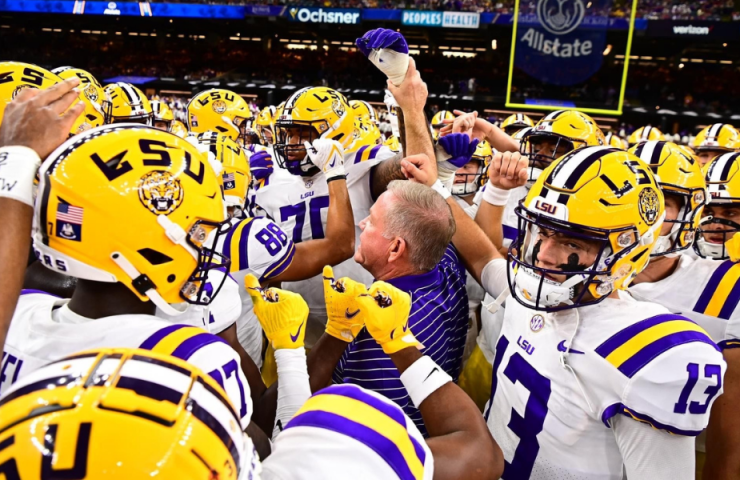 A new LSU Tigers football season started on Sunday. LSU fans flocked to the French Quarter in New Orleans to revel in anticipation of this new season. The Tigers had a new head coach in former Notre Dame headman Brian Kelly and a team with renewed spirit. The Superdome was rocking. It was a defacto home game for the Tigers.

What could possibly go wrong?

Well, apparently…everything! Mr. Murphy of Murphy’s Law fame bought a ticket and looked on from the stands to watch the Florida State Seminoles and LSU Tigers face off in the Big Easy.

Early on, LSU couldn’t get anything going consistently on offense.

Then, the hopes for an improbable comeback were dashed, thrown in a hole, and buried by the Seminoles.

The ‘Noles held off that improbable rally by the Tigers by blocking an extra point attempt by LSU K Damian Ramos that would have sent the game to overtime. Final Score: Florida State 24 – LSU 23.

From the LSU sideline, Brian Kelly (with no expression or emotion) observed some bad football by the Tigers:

The LSU offensive LIne was a Sieve

Run this route, I’ll fake it to you

Shank You Very Much

Daniels finished the game with 323 total yards. LSU had 348 total yards as a team. He carried LSU on his shoulders against the Seminoles.

With Florida State Leading 24-17, FSU RB Treshaun Ward fumbled at the LSU 1-yard line that was recovered by the Tigers. Possible redemption for LSU was 99-yards away with a little over a minute go in the game.

Leading the Tigers down the field, Daniels was 6 of 7 passing for 64 yards on the drive to get the Tigers down to the FSU 2-yard line. On an untimed down, Daniels found Jenkins in the back of the endzone for the touchdown. LSU was an extra point away from tying the game and sending it into overtime.

Then Mr. Murphy himself checked into the game.

Florida State blocked the extra point attempt to seal the victory for the ‘Noles. Game over!

LSU Tigers-More Learning to Do???

“We take no solace in a loss. I didn’t come to LSU to learn great lessons in a loss. The reality is we have some learning to do. We have to coach better and we have play better.” —-LSU Head Coach Brian Kelly

Kelly is the first full-time LSU head football coach to lose his coaching debut since 1995.

LSU paid north of $90 million to get Kelly to leave Notre Dame. This is a completely new coaching staff (with the lone exception being Offensive Line Coach Brad Davis). These players went through a complete Spring practice, Summer conditioning workouts, and then a full Fall camp, “learning” the new schemes of the new coaching staff.

Going into Week 2 against an FCS level opponent in Southern University, what other learning is needed? Unless he is referring to blocking up front and pass protection, tackling opposing ball carriers, limiting an opponent’s big plays, catching the ball on punt returns, you know all that basic football stuff. Then yes, by all means, learn.