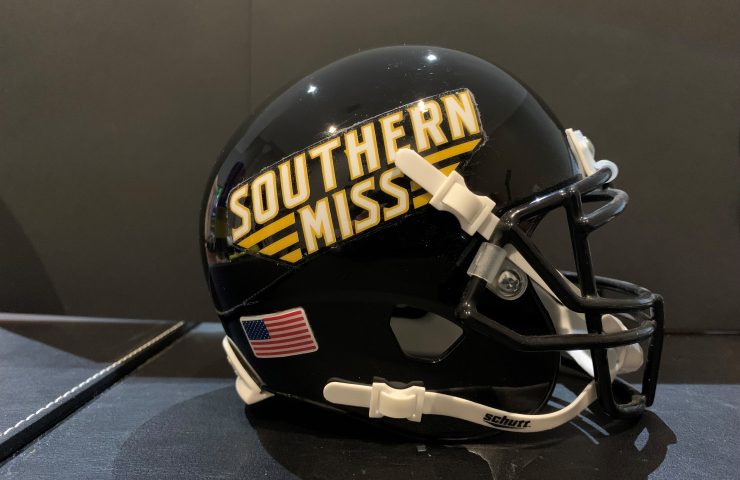 As Conference USA loses Southern Miss and other teams to the Sunbelt Conference in 2023, here is a look back 25 years ago at the Golden Eagles 1997 football season (season 2 of C-USA).

The Golden Eagles racked up 516 yards of total offense in a 41-7 rout of the Pitt Panthers in front of 50,000+ fans at Liberty Bowl Memorial Stadium.

Southern Miss outscored Pitt 27-0 in the 2nd half. The 34 point margin of victory was the largest in Liberty Bowl history. Gideon was named the game’s MVP.

The Golden Eagles were led by a stingy defense that ranked in the Top 30 in the country:

The ’97 version of the Nasty Bunch was manned by such standouts as Lytrell Pollard, who led the team with 114 tackles, Patrick Surtain (6 INTs), Marchant Kenney (106 tackles, 13 TFLs), Adalius Thomas, Perry Phenix, and Terrance Parrish, to name a few.

Shaw was 2nd in the conference in scoring with 96 points.

The Golden Eagles’ three losses came at the hands of SEC teams: a 21-6 loss to the defending national champion Florida Gators; a 27-13 loss to Alabama; and a 44-20 loss to the Peyton Manning-led Tennessee Volunteers.

The 1997 Southern Miss Golden Eagles were arguably the deepest team with regards to talent in school history.

Material for this article was sourced from conferenceusa.com; southernmiss.com; and sports-reference.com. Image Credit: sportslogos.net.

Previous ArticleGeorgia Takes Down Michigan to Face Alabama for the Natty