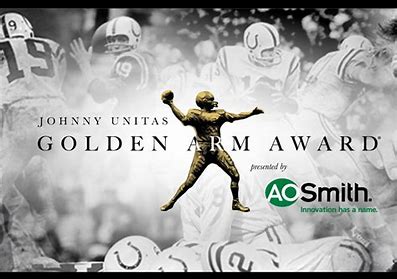 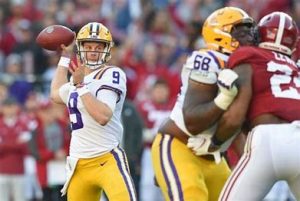 LSU QB Joe Burrow has been named the winner of the 2019 Johnny Unitas Golden Arm Award, the first LSU Tiger to win the award.

The Johnny Unitas Golden Arm Award is presented annually to the nation’s top quarterback that best exemplifies character, scholastic and athletic achievement. Burrow is the first LSU Tiger to win this prestigious award.

Candidates for the Golden Arm Award must be college seniors or fourth-year juniors on schedule to graduate with their class. In addition to the accomplishments on the field, candidates are judged on their character, scholastic achievement, and leadership qualities.

Burrow has set nearly every LSU single-season passing record and has led the Tigers to a 12-0 mark in 2019.

As LSU’s starting quarterback, Burrow is 22-3 with eight of those victories coming against Top 10 opponents, the most in school history. In 2019, LSU has Top 10 wins against Florida, Auburn, and Alabama. Joe is only the second quarterback to lead the Tigers to back-to-back 10-win seasons.

Burrow is the first player in SEC history to throw for 4,000 yards and more than 40 TDs in the same season.

In 12 games, he has completed a school-record 314 passes and thrown at least one TD pass in a school-record 16 consecutive games. Burrow is also the LSU record-holder for 300-yard passing games in a season (10) and career (12).

The SEC Offensive Player of the Week five times this season and seven during his career, Burrow ranks No. 2 in LSU history in career passing yards (7,260) and passing TDs (60).

Joe Burrow’s achievements will be honored in Baltimore at the Four Seasons Hotel on Wednesday, December 11th. Past winners of the award from the SEC include Peyton Manning (Tennessee, 1997) and Eli Manning (Ole Miss, 2003).

LSU will face #4 Georgia on Saturday in the SEC Championship Game in Atlanta. It will be LSU’s first trip back to the conference championship game since 2011. This will be Georgia’s third consecutive SEC title game appearance.