Home » Tigers Are SEC Champs With 37-10 Win Over Georgia 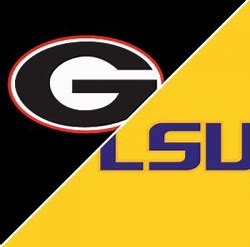 Tigers Are SEC Champs With 37-10 Win Over Georgia 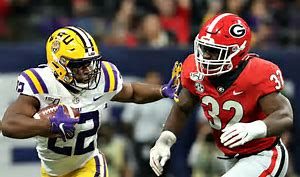 The LSU Tigers (13-0) scored early and often, jumping out to a 14-0 lead in the first quarter en route to a 37-10 victory over the Georgia Bulldogs (11-2) and winning the SEC Championship. It was LSU’s first conference championship since 2011.

The Tiger defense sacked Georgia QB Jake Fromm three times and intercepted him twice. Both interceptions were courtesy of CB Derek Stingley, who now has six interceptions on the season. The Tigers forced Fromm out of the game briefly with an ankle injury, but Fromm later returned. He was clearly hobbled and favoring his left ankle, but he finished the game.

For the fifth time in the last six games, Fromm completed less than 50% of his passes. He was 20 of 42 for 225 and a touchdown. The Bulldogs missed on several opportunities to gain big yardage and to score points. Georgia was just 3 of 13 on third-down conversions. And, K Rodrigo Blankenship missed two field-goal attempts.

The Bulldogs were held to just a field goal in the first half and were held scoreless in the third quarter.

The lone touchdown for Georgia did not come until the 4th quarter on a pass play from Fromm to WR George Pickens. Pickens was suspended for the first half of the game due to being ejected for fighting in last week’s Georgia Tech game.

Injuries were also a factor in this game with as many as six players having to leave the game.

Georgia managed just 21 yards rushing in the first half, and 61 yards rushing and zero rushing touchdowns for the game against the LSU defense. RB DeAndre Swift, a 1200 yard rusher for the Bulldogs, did not start the game due to a shoulder injury suffered in the Georgia Tech game. Swift finished with just 13 yards against LSU.

LSU QB Joe Burrow made a statement to the Heisman voters, passing for 349 yards and 4 touchdowns, with no interceptions and completing 73% of his passes. He also had 11 carries for 41 yards, running out of the pocket and gaining first downs to extend drives.

Burrow now has 4715 yards passing and 48 touchdowns on the season.

Burrow had great protection and lots of time to find open receivers, thanks to the Tiger offensive line holding their blocks and controlling the line of scrimmage against the vaunted Georgia defense. The Tigers did not allow a sack in the first half.

On a 2nd down and 10 play in the first quarter, Burrow dropped back to pass and had about 8 seconds of time to find WR Ja’Marr Chase in the end zone for their first touchdown of the game.

LSU dialed up a great gameplan against Georgia. The 37 points scored by the Tigers were the most allowed by the Bulldog defense all season. The Bulldogs were allowing only 10 points per game.

The LSU offensive line gave Burrow the protection and time he needed to find open receivers. On a 1st and 10 play inside their own 15 yards line, Burrow was forced out of the pocket. Eluding the pass rush, he threw on the run and connected on a 71-yard pitch and catch to Jefferson. That play set up a touchdown pass to Marshall on a 3rd and goal inside the 5-yard line.

About the only bright spot for the Georgia defense was holding the Tigers to 134 total rushing yards and zero touchdowns on the ground. But the Bulldogs came up with zero turnovers and only two sacks of Burrow. Those sacks occurred after LSU had control of the game and a comfortable lead.

Coming into this game, the Georgia defense ranked in the Top 5 nationally in scoring defense and rushing defense. Georgia had no answer for the talented LSU wide receivers and could not stop them from making plays in space and gaining big yards after the catch.

The Tigers are SEC Champs and now await the seedings for the College Football Playoff, making a statement that they should be the #1 overall seed. They will find out on Sunday.