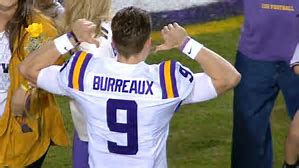 As the sun began to set in the west, it wasn’t just Saturday night in Death Valley. It was also Senior night in Death Valley. In a tribute to the LSU faithful, Sr. QB Joe Burrow ran out of the tunnel to greet his parents. He was wearing an LSU jersey with his name on the back spelled “BURREAUX.” Forever enduring himself to LSU fans everywhere, “Burreaux” then led the Tigers a 50-7 rout of the Aggies.

Burrow passed for 352 yards and three touchdowns as the Tigers finished the regular season undefeated at 12-0.

Burrow continued his record-setting season by setting the SEC single-season record for passing yards, surpassing Tim Couch. He now has 4366 yards and 44 touchdowns on the season.

LSU started out quickly, scoring just 2:10 into the first quarter on a 5-yard run by RB Clyde Edwards-Helaire. The Tigers kept their foot on the gas and raced to 31-0 lead at halftime.

Wide receivers Ja’Marr Chase, Justin Jefferson, and Racy McMath combined for 319 yards and four touchdowns. Chase has 1457 yards and 17 touchdowns on the season. Jefferson now has 1092 yards and 13 touchdowns.

Edwards-Helaire gained 136 all-purpose yards: 87 rushing and 49 receiving and a touchdown, his 16th on the season. He now has 1233 rushing yards on the season.

Fr. K Cade York made his presence felt and showed off some leg strength, connecting on field goals of 51 and 50 yards.

The lone bright spot for the Aggies was RB Isaiah Spiller, who gained 111 yards from scrimmage and 1 touchdown.

The Defense Made A Statement

It was a great night for the LSU defense as well. Playing their most complete game of the season, the Tigers held Texas A&M to 169 total yards: 97 passing and 72 rushing. LSU intercepted Aggie QB Kellen Mond three times, with Mond completing just 33% of his passes. The Tigers sacked him six times, recorded eight tackles for loss, and recorded a safety.

With the three interceptions, D.B.U. has intercepted 14 passes in their last nine games.

LSU will now shift their focus to the Georgia Bulldogs, their opponent in next week’s SEC Championship Game. The Bulldogs took care of Georgia Tech 52-7, but it was a costly victory. RB DeAndre Swift left the game with a shoulder injury and did not return. He is questionable for the LSU game. WR George Pickens was ejected for fighting and must sit out the first half of the championship game against the Tigers.

This is a major hit to an already depleted wide receiver corps that has lost their best receiver in Lawrence Cager to injury. He will not be available against LSU.

LSU continues on toward their goal of getting to the College Football Playoff and winning a national championship.