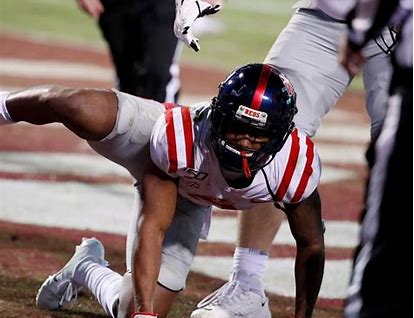 There was drama in Starkville as Mississippi State beat Ole Miss for the 21-20 in the Egg Bowl. It was the 116th meeting between the two schools, the second most-played rivalry in the SEC behind only Auburn-Georgia. The Bulldogs entered the game as winners of six of the last 10 meetings in the Thanksgiving night classic.

But Ole Miss had won the last two meetings in Starkville. And Ole Miss starting QB John Rhys Plumlee entered the game ranked third nationally in rushing yards among quarterbacks this season. Plumlee eclipsed the 1000 yard mark rushing in the game. It was his first start in the Egg Bowl.

Mississippi State RB Kylin Hill entered the game leading the SEC in rushing with 1215 yards. He finished the game with 132 yards rushing.

Senior QB Tommy Stevens was ruled out for the Bulldogs at game time with an upper-body injury. True freshman QB Garret Schrader got the start. It was his first Egg Bowl start as well.

Both Defenses Were Fired Up

It was a defensive battle early on as Ole Miss sacked Schrader for a 5-yard loss on the first play from scrimmage. The Bulldogs would go three and out and were forced to punt.

On the Rebels first possession, RB Jerrion Ealy fumbled the ball back to the Bulldogs. Three 3 and out possessions and a fumble combined by both teams characterized the first quarter.

Mississippi State scored on a 27-yard run by RB Nick Gibson to take an early 7-0 lead.

State would score again on a run by Schrader to put the Bulldogs up 14-0.

Ole Miss would not score until late in the second quarter on a 2-yard run by Plumlee to cut the lead to 14-7.

On a drive midway in the second quarter, the Ole Miss defense forced two incomplete passes and a stop for a 1-yard loss. on 4th down and 11, the Bulldogs fumbled the punt snap at midfield and Ole miss took over on downs.

Penalties And Turnovers Were A Factor

Both teams went 3 and out to start the 3rd quarter. On the Rebels second possession, Plumlee fumbled and the Bulldogs recovered. On the ensuing drive, the Bulldogs converted on 4th down and 3 to get a new set of downs, Schrader then scored his second rushing touchdown to put Mississippi State up 21-14.

As the final quarter began, State put together a drive that was highlighted by a 30-yard run by Gibson and an 11-yard pass by Schrader. But on 3rd down, Schrader fumbled and Ole Miss recovered.

Rebels QB Matt Corral entered the game, replacing Plumlee. Corral would throw an interception, killing a drive. It was the Rebels’ third turnover of the game.

The Drama In Starkvegas

Later on, with two minutes left in the game, Ole Miss mounted drive. On a 3rd down and 10, Corral threw and interception. But it was negated due to an ineligible receiver penalty called on Ole Miss. On 3rd and 15, Corral was sacked for a 9-yard loss. On 4th and 24, Corral completed a pass to convert to first down.

The Rebels would throw an incomplete pass on first down, but a roughing the passer penalty called against the Bulldogs moved the Rebels half the distance to the goal to set up 1st and 10 at the 15-yard line. Ole Miss seemingly scored on a 4th and 6 play, but that touchdown was negated due to Mississippi State being flagged for off-sides.

After two penalties and stops for no gain, Ole Miss faced 3rd and goal. With 0:09 seconds left, Corral threw a touchdown pass to WR Elijah Moore to cut the Bulldogs lead to 21-20.

But an unsportsmanlike conduct penalty was called on Ole Miss after the score. That penalty pushed the extra-point try 15 yards further back than normal. Ole Miss K Luke Logan missed the extra point, pushing the kick wide right.

With 0:04 seconds left in the game, the Rebels attempted an onside kick. But the Bulldogs recovered the kick cleanly as time expired. The final score: Mississippi State 21 – Ole Miss 20.

The Bulldog defense held Ole Miss scoreless in the first and third quarters. Both teams combined for seven sacks and 17 tackles for loss.

Schrader finished with 108 yards through the air on 10 of 14 passing and no touchdowns and 1 fumble, but he had two rushing touchdowns.

Both teams combined were 9 of 26 on 3rd down conversion attempts.

With the win, Mississippi State improved to 6-6, becoming bowl eligible for the 10th consecutive season. Ole Miss finishes the season at 4-8.

Material for this article sourced from http://sportslogos.net