The #5 LSU Tigers remained undefeated going up against the toughest defense they have faced all season, beating the #7 Florida Gators 42-28 in Death Valley on Saturday night.

Well, that lasted all of about 3 hours as the Tigers racked up 512 yards of total offense. 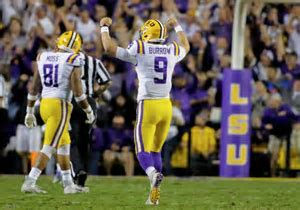 QB Joe Burrow was 21 of 24 passing for 293 yards and 3 touchdowns and zero interceptions, completing 87% of his passes.

RB Clyde Edwards-Helaire averaged 10 yards a carry as he rushed for 134 yards on 13 carries and 2 TDs, one of which was a 39-yard scoring run. RB Tyrion Davis-Price also added a rushing touchdown on a 33-yard run. On the night, the Tigers rushed for a total of 219 yards.

WR Justin Jefferson caught 10 balls for 123 yards and a touchdown and WR Ja’marr Chase had 7 catches for 127 yards and 2 TDs, including one that went for 54 yards.

On offense, the Gators gained 457 total yards. QB Kyle Trask was 23 of 39 for 310 yards and 3 TDs and 1 interception, and the Gator rushing attack was held to a total of 146 yards for the game and no touchdowns on the ground.

The Tiger defense was a “bend but don’t break” unit and they made plays when they needed to. The Gators were 9 of 17 on 3rd down conversions and were held to a single touchdown in the second half, and scoreless in the 4th quarter. The Tigers sacked Trask twice and made 5 tackles for loss.

DB Derek Stingley intercepted a pass in the endzone in the 4th quarter that killed a scoring drive for Florida.

LSU improves to 6-0 and moves up three spots to #2 in the AP Poll behind Alabama.

LSU travels to Starkville to take on Mississippi State next week. Florida falls to 6-1 and is on the road at South Carolina next week.