QB Jalen Hurts accounted for 366 total yards and 4 TDs (3 passing, 1 rushing) and the Sooner defense was in Texas QB Sam Ehlinger’s face all day, sacking him 9 times, as #6 Oklahoma beat #11 Texas 34-27 in the Red River Showdown. 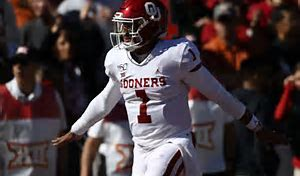 Hurts did turn the ball over twice, with 1 fumble and 1 INT. RB Kennedy Brooks rushed for 105 yards and WR CeeDee Lamb had a career day with 10 catches for 171 yards and 3 TDs.

Lamb scored on a 51-yard flea-flicker after Texas was flagged for personal foul-targeting, resulting in Texas defender Malcolm Roach being ejected from the game.

The Sooners played a well-balanced game and gained 511 total yards on the day, 235 yards passing and 276 yards rushing.

The Oklahoma defense held Texas to just a field goal in the first half. Along with the 9 sacks, which tied a school record, the Sooners allowed Texas only 100 yards rushing at just 2.8 yards per carry.

Ehlinger passed for just 210 yards and no passing touchdowns, and he was held to -9 yards rushing. He did score on two short TD runs on goal-to-go situations.

RB Roschon Johnson gained 95 yards on 8 carries and scored a TD and WR Collin Johnson had 6 catches for 82 yards for the Longhorns.

Both teams were a combined 9 of 26 on 3rd down conversions. The game was sloppy at times from an execution standpoint, with dropped passes and penalties. The Sooners committed 7 penalties for 84 yards.

On one drive late in the 3rd quarter by the Longhorns, the Sooners were flagged for holding and pass interference, which extended the drive for Texas and allowed them to score on an Ehlinger 2 yard run and cut the Sooner’s lead to only 3 at 20-17.

But in the 4th quarter, Oklahoma continued its pressure on Ehlinger with QB hurries and more sacks. The Sooners would score 2 more TDs, on a 27-yard pass from Hurts to Lamb and a 3 yard run by Hurts. Then the Longhorns answered with a field goal and a 10 yard TD run by Ehlinger to cut Oklahoma’s lead to 7 points, 34-27.

With 1:49 left in the game, Texas attempted an onside kick. But Oklahoma recovered the kick and was able to kneel down on three straight plays to run out the clock.

Oklahoma will host West Virginia next week, while Texas hosts Les Miles and the Kansas Jayhawks.

Previous Article4 Unbeaten Group Of 5 Teams That Want A Berth In A New Years 6 Bowl
Next Article#5 LSU Beats #7 Florida 42-28 To Remain Undefeated, Moves Up to #2 In The AP Poll