Home » What Will Be Joe Burrow’s Legacy At LSU? 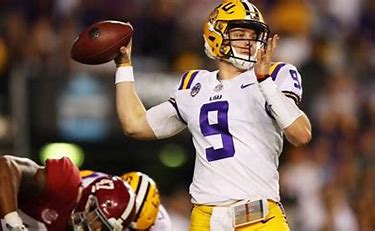 What Will Be Joe Burrow’s Legacy At LSU?

What will be Joe Burrow’s legacy at LSU? When the senior quarterback arrived on LSU’s campus as a graduate transfer in 2018, who could have imagined the extraordinary success and offensive metamorphosis that he would help bring to the LSU Tigers during the 2019 season.

Last year, Joe Burrow arrived from Ohio State after failing to beat out Dwayne Haskins for the starting job. Joe had been part of a Buckeye quarterback room that at one point also consisted of Cardale Jones, J.T. Barrett, and Braxton Miller.

A former Mr. Ohio Football in 2014 and the son of a college football coach, Burrow would eventually beat out Myles Brennan for the LSU starting job in 2018. He would lead the Tigers to a 10-3 record and a win in the Fiesta Bowl.

What A Difference A Year Makes

Burrow’s offensive numbers in 2018 compared to this year are literally night and day:

What has brought on such a drastic change? For one, it was the hiring of Joe Brady as Passing Game Coordinator. Brady was in the same position with the NFL’s New Orleans Saints, coaching QB Drew Brees. Brady immediately installed the run-pass option spread offense that was so highly coveted by head coach Ed Orgeron.

Secondly, Burrow grew up on this offense, learning it and running it through his formative years on his way to being one of the top quarterbacks in the country. This offense is tailor-made for him.

Burrow has kept LSU in position to stay in the lead or to take the lead and keep it in every game this season.

He is durable and can take a hit (remember the hit he took in the Fiesta Bowl?). He sees the entire field as he goes through his progression. He can read defenses and change plays at the line of scrimmage based on what the defense is showing. And he can make all the throws required of a quarterback of elite caliber.

He can also make plays with his legs, when necessary. So many times he has extended drives by gaining the first down by running out of the pocket to avoid pressure. Although this year, it hasn’t been that much of a necessity.

Burrow is a finalist for numerous national awards and is the front-runner to win this year’s Heisman Trophy.

But just as important is his ability and desire to praise and to make all of his offensive teammates in the skill positions better (as shown during his post-game interview after the win at Alabama. He bestowed praise upon RB Clyde Edwards-Helaire for his performance and that of his teammates). He is humble and willing to give the spotlight to his teammates. The chemistry he has with his teammates is probably the most under-rated quality about him. Joe Burrow is a leader.

Edwards-Helaire has flourished in this offense as well. Burrow trusts him and is not afraid to dump a pass off to him in the flat and let him gain yardage in the passing game. Edwards-Helaire has 39 receptions for 289 yards and a score. His ability to catch passes out of the backfield is a skill highly sought after by NFL teams and will almost certainly raise his draft stock ahead of April’s NFL Draft.

What will be Joe Burrow’s legacy at LSU? It’s not just the record-setting numbers, the wins, the awards. I think it is more to do with his work ethic and his skills as a quarterback that was unrealized at the flagship school of his home state. That he could come to LSU, knowing their past history as a run-first team, and eventually show LSU something they had never seen before: a quarterback and a team that could flourish in a modern-day offense and win at the highest level of college football.

Burrow will lead the LSU Tigers into Death Valley for the final time on Senior Night as they take on the Texas A&M Aggies Saturday night. The Tigers have already secured a spot in the SEC Championship Game in Atlanta against the Georgia Bulldogs.

What will be Joe Burrow’s legacy at LSU? Heart and determination, unique qualities that cannot be coached. A burning desire to win, love for his teammates, and love for the game.

Material for this article sourced from http://cfbstats.com