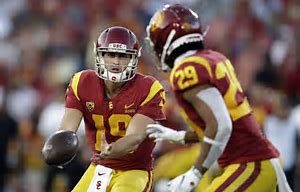 The USC Trojans overcame an injury to starting QB Kedon Slovis and silenced the calls for Urban Meyer at least for another week as the Trojans beat #10 Utah 30-23 Friday night at the L.A. Coliseum.

Jr. QB Matt Fink took over for Slovis in the first quarter and promptly led USC on a scoring drive, setting the tone for the rest of the game. Fink passed for 351 yards and 3 TD’s and 1 INT. He completed 70% of his passes. 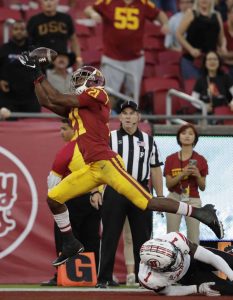 Fink threw TD’s to three different receivers: WR Michael Pittman Jr. caught 10 passes for 232 yards and 1 TD, Tyler Vaughns hauled in 4 for 49 yards and a TD, and Amon-Ra St. Brown caught 5 for 68 yards and a TD.

The Utes outgained the Trojans in total yards and first downs and held USC to just 28 yards rushing, but committed 16 penalties for 120 yards.  Utah was held to just 2 field goals in the 4th quarter as USC was able to hold on for the win.

Utah QB Tyler Huntley passed for 210 yards and a TD and added 60 yards on the ground. RB Zack Moss was held to just 20 yards rushing and did not see the endzone all night.

Slovis left the game in the first quarter with an undisclosed injury. His status is uncertain. He is the second Trojan quarterback to suffer an injury this season. Fr. QB J.T. Daniels was named the starter after fall camp and suffered a season-ending knee injury in week 1 against Fresno State.

There was hype built up before the game that USC fans would start cheering in unison “we want Urban” if the game was getting out of hand against the 10th ranked team in the country. But Fink came in and led the Trojans down the field to score on his very first drive.

USC travels to Washington next week. Utah will be at home next week against Washington State.