Home » A Look Back: The 2015 Southern Miss Golden Eagles

A Look Back: The 2015 Southern Miss Golden Eagles

The 2015 Southern Mississippi Golden Eagles were an offensive machine under head coach Todd Monken during his final year at the helm and posted some impressive numbers on both offense and defense. 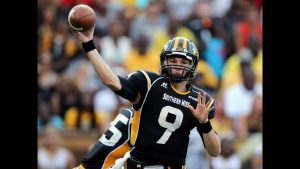 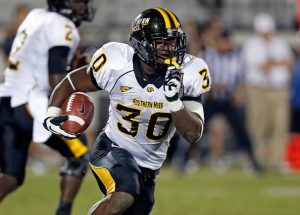 At mid-season, the Golden Eagles went on a 6-game winning streak. During that streak, the offense produced the following:

For the season, Southern Miss accounted for 7,133 yards of total offense.

The Golden Eagles were aggressive and made plays on the defensive side of the ball as well. Led by D’Nerius Antoine and his 103 tackles, the defense as a unit made 13 INT’s, produced 32 sacks and accounted for 95 tackles for loss. They also forced 24 turnovers, including 7 (4 INT’s and 3 fumbles) in one game in a 58-24 win against La. Tech.

Southern Miss finished the year with a 9-5 record and a loss to Washington in the Heart Of Dallas Bowl, losing by a score of 44-31. Coach Monken left the program to become an assistant coach for the NFL Tampa Bay Buccaneers.

Jalen Richard and Michael Thomas would both go on to the NFL. Richard signed with the Oakland Raiders as an undrafted free agent. Thomas was a 6th round selection of the Los Angeles Rams in the 2016 NFL Draft.