Records Were Shattered, Defense Has Issues As LSU Beats Ole Miss 58-37 To Move To 10-0

The LSU Tigers offense rolled into Oxford, Mississippi on Saturday night and proceeded to put up prolific numbers against the Ole Miss Rebels in a 58-37 win to remain undefeated.

The Tigers gained 714 yards of total offense, the 2nd most in school history and Ole Miss gained 614 yards. Both schools combined for 1328 yards, the 3rd most yards gained ever in an SEC game.

LSU got the ball first to start the game and stormed out to a 31-7 lead by halftime. 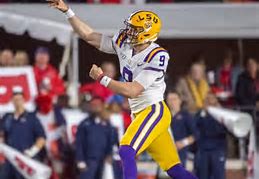 But the LSU defense, the cornerstone of LSU teams for decades, was overwhelmed, to say the least.

Coming into the game, LSU was allowing just a 100 yards rushing per game, good enough for #13 nationally. The Rebels had the #1 rushing offense in the SEC, averaging 247 yards per game.

Something had to give right? 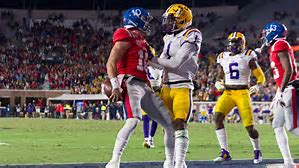 Rebels QB John Rhys Plumlee ran for 212 yards on 21 carries and scored 4 rushing touchdowns. He also added 123 yards through the air, with no touchdowns and 1 INT. His 212 yards rushing set a school record for rushing by an Ole Miss quarterback.

Plumlee’s interception by DB Kary Vincent was the Tigers 11th in their last 7 games.

Ole Miss RB Jerrion Ealy also added 141 yards on the ground, and WR Elijah Moore caught 9 passes for 143 yards and scored on a 55-yard pitch and catch from QB Matt Corral in the 4th quarter.

The LSU defense just looked out of sync. Poor tackling and being out of position allowed Ole Miss to gain big yardage and to score seemingly at will in the 2nd half. The 55-yard touchdown catch by Moore, a 35-touchdown run by Plumlee in the 4th quarter. In the 3rd quarter, Plumlee ran for touchdowns covering 60 and 46 yards.

Ole Miss outscored LSU 30-27 in the second half, but they were only 2 of 11 on 3rd down conversions.

But the Tigers did win by 21 points and broke some records as well in the process. 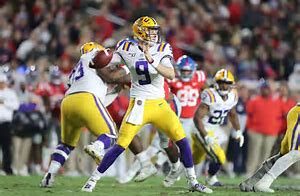 Ja’Marr Chase set the school single-season record for receiving touchdowns with 13 on the season. He and Jefferson both eclipsed the 1000 yard mark in receiving on the season. 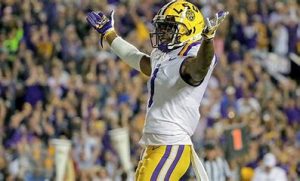 Next up for the Tigers: the Arkansas Razorbacks, who travel into Death Valley next Saturday, November 23rd. Kickoff is scheduled for 6 p.m. and the game will be televised on ESPN. Arkansas is 2-8 on the season, 0-6 in the SEC.

Previous ArticleGophers, Hawkeyes And A Bronze Pig: 10 Facts About Minnesota vs Iowa Football
Next ArticleLSU Can Clinch SEC West With A Win Over Razorbacks