Home » LSU Can Clinch SEC West With A Win Over Razorbacks

LSU Can Clinch SEC West With A Win Over Razorbacks

The #1 LSU Tigers continue their magical run on Saturday in Death Valley as the Arkansas Razorbacks come to visit. LSU can clinch the SEC West division title with a victory. LSU has won the last three meetings against Arkansas and 6 of the last 9.

Arkansas comes into this game amid some chaos as head coach Chad Morris was fired 22 games into his career with the Razorbacks. They are currently 2-8 on the season and 0-6 in conference play.

At times this season, Arkansas has used two quarterbacks in Nick Starkel and Ben Hicks. Starkel, a transfer from Texas A&M, has thrown more interceptions than touchdowns this season.

Hicks is a transfer from SMU and played under Morris when he was head coach there. Hicks came to Arkansas after passing for over 9,000 yards with the Mustangs. But he has struggled this season with the Razorbacks.

A lone bright spot for the Arkansas offense, which scores only 22 points per game, is RB Rakeem Boyd, who has rushed for over 1000 yards so far this season. 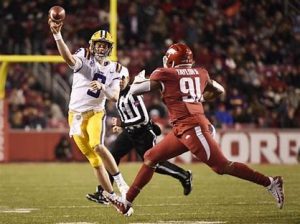 QB Joe Burrow is the front-runner for the Heisman Trophy and needs 313 yards to reach 4,000 yards passing on the season. He has thrown for 3687 yards and 38 TDs, with only 6 INT’s. Burrow is completing 78% of his passes.

He is the undisputed leader of this team and continues to make big plays, keeping drives alive both with his arm and his legs. 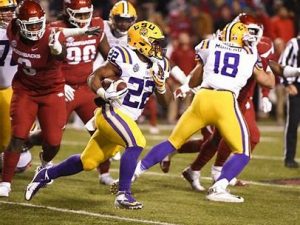 RB Clyde Edwards-Helaire will almost certainly reach 1000 yards rushing on the season, needing just 42 yards against the Razorbacks to reach that milestone. He is also a finalist for the Doak Walker Award, given to college football’s most outstanding running back. 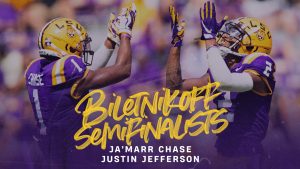 Wide receivers Ja’Marr Chase and Justin Jefferson have both eclipsed the 1000 yard mark on the season and both are semifinalists for the Biletnikoff Award, given to college football’s most outstanding receiver. They are only the fourth duo in SEC history to gain 1000 yards receiving in the same season.

The LSU defense must improve. The Tigers showed sloppy play against Ole Miss, with missed tackles and players being out of position to prevent big yardage plays. LSU does have 11 interceptions in their last seven games.

At his weekly press conference, LSU head coach Ed Orgeron said that Arkansas will be “fired up” https://www.secsports.com/video/28109517/coach-o-expects-razorbacks-fired-up

A victory over the Razorbacks will clinch the division title and will secure a date with the Georgia Bulldogs in the SEC Championship Game for the first time since 2011.

Previous ArticleRecords Were Shattered, Defense Has Issues As LSU Beats Ole Miss 58-37 To Move To 10-0
Next ArticleShould The SEC Stop Scheduling FCS Teams?