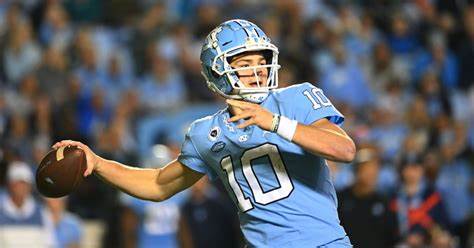 North Carolina QB Drake Maye had an outstanding season in 2022, leading the Tar Heels to the ACC Championship Game and earning numerous postseason accolades. And he did it as a redshirt freshman.

Maye is the son of former Tar Heels QB Mark Maye, former Parade All-American who was a starter for the Tar Heels in the 1980s. Drake comes from a football and very athletic family. His brother Luke won a national title with the UNC basketball team.

In his senior year of high school, he led his Myers Park team to a 12-1 record and a league title. Maye passed for 3512 yards and 50 TDs (both school records) and only 2 INTs. He completed 72 % of his passes.

Maye wanted to go to a college program that could win. But he was raised in the Carolinas, and it was only fitting that he follow in his father’s cleat steps and play quarterback for the Tar Heels, so he enrolled early in Chapel Hill.

An Outstanding 2022 Season for maye

In his first collegiate start vs Florida A&M, Maye completed 29 of 37 passes (78%) for 294 yards and 5 touchdowns. He then helped the Tar Heels win nine of their first ten games.

But, he proved he was indeed mortal over his final three games. He threw just one TD pass and 4 INTs, in three consecutive losses to finish the season, including a 39-10 loss to Clemson in the ACC Championship Game.

In those three losses, the Tar Heels failed to score 30 points.

As a result, he led the ACC in passing and total offense. For example, he accounted for 5 TDs vs Appalachian State, 5 TDs vs Virginia Tech, and 4 touchdowns vs Wake Forest.

For his efforts, Maye earned the following accolades:

Name, Image, and Likeness Has an Ugly Side

Now is the time of year when players throw their names in the transfer portal hat. But, apparently, two schools (unnamed) have tried to give Maye reasons why he should transfer. Five million reasons. As in $5 million dollars. This has been spotlighted by both UNC head coach Mack Brown and Pittsburgh head coach Pat Narduzzi.

However, Maye has stated that it is his intention to return to Chapel Hill for the 2023 season.

The Tar Heels will take on the Oregon Ducks in the San Diego County Credit Union Holiday Bowl on December 28th.