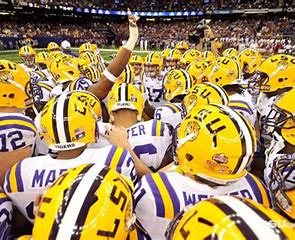 Recruiting is the lifeblood of every college football program. Today was National Signing Day, the day when high school athletes choose which college or university they will take their football talents to.

As the #1 team in the College Football Playoff rankings, LSU yielded a top-five national recruiting class for 2020, and ranking #3 in the SEC. According to 247sports, the Tigers signed 19 recruits on the first day, highlighted by these standouts:

Also in this class are quarterbacks Max Johnson, 6-4, 216 LBS from Watkinsville, Georgia, and T.J. Finley, 6-7, 250 from Ponchatoula, Louisiana. They will share the quarterback room and compete with current Tiger QB Myles Brennan for the starting job next season.

The Tigers signed 10 recruits on defense and 9 on offense.

LSU still retains a “hard commitment” from Haynesville DT CamRon Jackson, 6-6, 270 LBS. Jackson has yet to sign a letter of intent.

As the sun rose on this National Signing Day, this LSU recruiting class ranked in the top 3. By the end of the day, the class had dropped to #5. The Tigers are ranked behind Clemson, Alabama, Ohio State, and Georgia. Six SEC schools finished in the Top 10.

Two Louisiana prospects decided to leave the state. CB Decameron Richardson, 6-2, 176 LBS of Bossier High, signed with Mississippi State. Richardson was selected all-state at both running back and cornerback. He projects as a cornerback at the college level. As the #38 ranked cornerback in the nation, Richardson also received offers from South Carolina, Houston, Tennessee.

S Eric Reed, 6-1, 197 LBS of Calvary Baptist in Shreveport.  As the #16th ranked safety in the country and the #6 safety in Louisiana, he has forced 9 fumbles and has two interceptions. Reed also received scholarship offers from LSU, Ole Miss, Kentucky, Georgia, Notre Dame, and Virginia.