Home » Napier Has The Ragin’ Cajuns Headed in the Right Direction 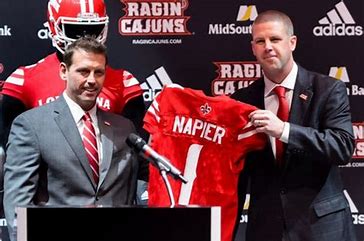 Napier Has The Ragin’ Cajuns Headed in the Right Direction 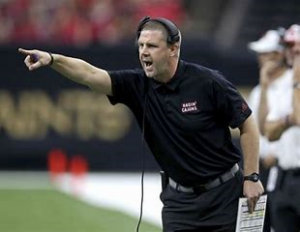 The Louisiana Ragin’ Cajuns are preparing to take on Miami (OH) in the Lending Tree Bowl in Mobile, Alabama. And, the man in charge of that preparation is second-year coach Billy Napier. Napier has the Ragin’ Cajuns headed in the right direction, producing a school-record 10 wins this season.

As a result of this record-setting season, Napier has drawn attention for vacant head coaching jobs. According to ragincajuns.com, the most recent speculation has been that he was a candidate for the head coaching job at Mississippi State. But Napier has said he is not a candidate and has since agreed to a 2-year contract extension that will keep Napier in Lafayette until 2025.

Napier has built the Ragin’ Cajuns into a disciplined unit. They have committed just 14 turnovers this season and committed zero turnovers in six games, including four in a row in the month of November.

On the offensive side of the ball, the Ragin’ Cajuns are extremely effective. Their offensive numbers are impressive:

Two of Louisiana’s three losses came at the hands of Appalachian State, the most recent loss coming in the Sunbelt Conference Championship Game to the Mountaineers 45-38. The Ragin’ Cajuns gained more yards and first downs than the Mountaineers. But they turned the ball over three times and a comeback late in the fourth quarter came up short as App. State held on for the win.

Louisiana has played solid on defense. They rank #16 in the FBS in pass defense at 193 yards per game. In six games, Louisiana allowed zero touchdown passes and 11 total all season. They allow opponents only 20 points per game, which is good enough for 20th in FBS.

The Ragin’ Cajuns have forced 18 turnovers, with a high of five coming in a game at Ohio. But in their two losses to Appalachian State, Louisiana forced only one turnover.

In the Sunbelt Conference, the Louisiana defense ranks #1 in pass defense (193 yards/game) and scoring defense (19.9 points/game). And, they rank #2 in total defense at 373 yards.

Napier has brought a wealth of coaching experience to the Ragin’ Cajuns these last two years:

In his five years working with the offense at Alabama under Nick Saban, the Crimson Tide was 63-7 and Napier was part of two national championship teams.

Napier graduated from Furman in 2002. He was a two-time All-Southern Conference quarterback. In his senior year, he threw for 2475 yards and was a finalist for the Walter Payton Award, given to the most outstanding offensive player in the FCS.

Yes, Napier has the Ragin’ Cajuns headed in the right direction.