Mustangs Go Down In 54-48 Loss To Memphis

Such was the scene as the Memphis Tigers held on to beat previously undefeated SMU 54-48 on Saturday night. The game held the prime time slot on ESPN and both teams did not disappoint and it was a shame that someone had to lose.

Memphis QB Brady White threw for 350 yards and 3 TDs on 19 of 33 passing and no interceptions. RB Kenny Gainwell added 88 yards and 1 touchdown on the ground. But WR Antonio Gibson and WR Damonte Coxie had a career night, combining for 529 yards of offense. Coxie had 143 yards receiving on 7 catches. Gibson had 97 yards rushing, 130 yards receiving and 159 yards in kick returns, including a 97-yard kickoff return for a touchdown in the 3rd quarter. 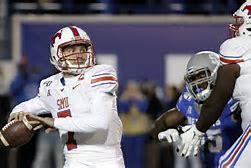 SMU QB Shane Buchele was equally impressive, going 34 of 54 passing for 456 yards and 3 TDS, and no interceptions. WR James Proche had 13 catches for 149 yards and a TD. WR Rashee Rice caught 7 passes for 122 yards.

It was a historic night for Memphis as the Tigers improved to 8-1 and moved up to #19 in the AP Poll. SMU fell from the ranks of the unbeaten and their record also stands at 8-1 and falling to #23 in the AP Poll.

SMU hs remaining games with East Carolina, at #25 Navy, and finish the season at home against Tulane. Memphis has games remaining at Houston, at South Florida, and against #17 Cincinnati at home to close out the regular season.