The Memphis Tigers gained 301 yards of total offense and scored touchdowns in a variety of ways as they beat the Midshipmen of Navy 35-23 to remain undefeated.

The Tigers are arguably the best of the Group of 5 teams in the country at this point in the season.

The Midshipmen were led by QB Malcolm Perry, who passed for 82 yards and a TD rushed for 91 yards and 2 TD’s. Perry didn’t throw any interceptions. RB Keoni-Kordell Mahekau added 101 yards on just 8 carries, averaging a whopping 12 yards per carry.

The Memphis defense held Navy scoreless in the 3rd quarter, sacked Perry twice, forced an interception, and recovered a fumble. And, they made 8 tackles for losses.

Defense has been the strongest phase of the game for the Tigers this season. In four games this season, Memphis has produced the following numbers on defense: 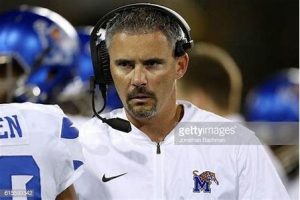 Memphis head coach Mike Norvell has been at the helm since 2016. He has taken the Tigers to 3 bowl games in 4 years but have an 0-3 bowl record in that period. Norvell’s record at Memphis is 30-14 and his name has come up in conversations regarding potential Power 5 coaching vacancies. Norvell is regarded as the next up and coming head coach.

Could Norvell stay in the state and become the next head coach in Rocky Top?  If the Jeremy Pruitt experiment continues to implode and the Vols sink further into the abyss of mediocrity, Tennessee Athletic Director Phillip Fulmer should begin his coaching search by making Norvell his first call.