LSU Has Record-Setting Day In 66-38 Win Over Vandy

The LSU offense set records and the defense got their first two interceptions of the season as the Tigers beat Vanderbilt 66-38 on Saturday in Nashville. 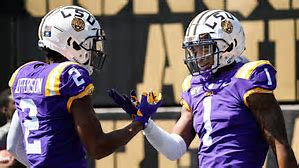 In just 3 quarters of play, QB Joe Burrow threw for 398 yards and 6 TD’s, setting a school record for touchdowns in a single game. 3 different receivers caught touchdown passes, including WR Ja’Marr Chase who set a school record with 10 receptions for 229 yards. Racey McMath caught 5 passes for 48 yards and 1 TD, and Justin Jefferson caught a TD pass.

After suffering injuries to Rashard Lawrence, Glen Logan, K’Lavon Chaisson, and Todd Harris, the Tiger defense had to use second-string players in spots and it showed. Add the fact that LB Michael Divinity left the game with a lower leg injury and the Tigers let winless Vanderbilt score more points than they should have. Poor tackling was prevalent throughout the game.

But the defense made some plays when it needed to, with Dereck Stingley and Jacoby Stevens each getting interceptions in the game, the Tigers first of the season. LSU sacked Vandy QB Riley Neal 3 times and recorded 9 tackles for loss.

Micah Baskerville was a demon on special teams. He fielded an on-side kick and returned it deep into Vanderbilt territory to set up an LSU touchdown. And he also blocked a Vanderbilt punt deep in their own territory and recovered the ball in the endzone for a touchdown. 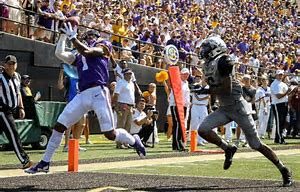 The Tiger offense is humming along, but the defense is not the LSU defense that we have grown to know and love. They have an open date next week, which couldn’t come at a better time. It will give injured players more time to heal up and give the defense time to work out some issues.