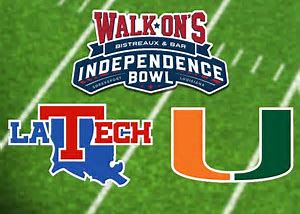 La. Tech Bulldogs win the Independence Bowl, beating the Miami Hurricanes 14-0. The Bulldogs won their 10th game of the season for the first time since joining the FBS in 1984.

This was definitely not the same Miami team of the 1980s. This was a team that needed an identity and couldn’t find one all season. Today was no different.

The Hurricanes were shutout, the first shutout in Independence Bowl history. Miami gained a total of just 227 yards of offense. Miami used three different quarterbacks in the game: starter Jarren Williams, Tate Martell, and N’Kosi Perry. As a unit, all three quarterbacks combined for 153 yards through the air and averaged less than 10 yards per pass.

The running backs gained just 74 yards on the ground, averaging less than five yards per carry.

More often than not, The Canes faced 3rd down and long situations all day. That didn’t bode well for Miami because they came into this game dead last in FBS in 3rd down conversion at 26%.

The Miami defense recorded one interception, 5 tackles for loss, and three sacks. The Canes entered the game ranked #7 in the FBS in sacks.

Louisiana Tech was led by senior QB J’Mar Smith, making his 38th career start in his final game with the Bulldogs. His record as a starter is 25-13. Smith completed 13 of 28 passes for 163 yards and an interception. RB Justin Henderson rushed for 95 yards on 22 carries but did not find the end zone. La. Tech gained 337 yards of total offense.

As a unit, the Bulldog defense was on fire. They recorded two interceptions, four sacks and four tackles for loss. The defense has forced at least one turnover in 17 straight games, the longest active streak in the country.  They have forced a turnover in 31 of their last 32 games.

Because the Miami offense was ranked 90th in the FBS in total offense, 41st in passing offense, 120th in rushing offense, and 74th in scoring offense, there was speculation that the game would the last for Dan Enos as offensive coordinator.

The Bulldogs bowl record now stands at 8-3-1. They won their 6th straight bowl game, the longest active streak in the nation. This was the Bulldog’s fifth appearance in the Independence Bowl, improving their record to 3-1-1.