Home » Justin Fields And A Stout Defense Has The Buckeyes Rolling

Justin Fields And A Stout Defense Has The Buckeyes Rolling

Before the start of this season, there was one particular transfer that set the college football world abuzz with conversation: QB Justin Fields from Georgia to Ohio State.

At 6-2, 205 Fields, a former 5-star dual-threat quarterback from Kennesaw, Georgia signed with the Georgia Bulldogs in 2018. And even though he saw the field in limited action, he could not beat out QB Jake Fromm for the starting job. So Fields decided to enter the transfer portal and take his talents north to Columbus, Ohio. 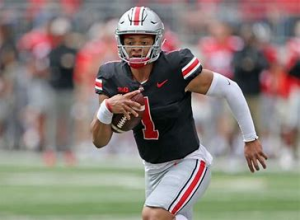 Before he even took a snap for the Buckeyes, Fields was penciled in as a preseason All Big-10 conference selection. I myself was skeptical simply because all anybody had to go on in this lofty praise was his limited college experience and all of his high school exploits on the field.

But Fields won the starting job and in the first half of this season, he has silenced the critics and skeptics, myself included. He has helped lead the Buckeyes to a #4 national ranking as a first-time starter.

His offensive numbers this season speak for themselves:

The Ohio State offense has been near the top of the rankings in team offense all season. Aside from averaging 254 yards per game passing, the Buckeyes have attained high rankings when it comes to moving the ball the field:

But Fields is not alone in helping the Buckeyes achieve success this season. The defense has been playing lights out through the first five games.

The Buckeyes returned 9 starters on defense from the 2018 team and that experience has shown, based on the defensive stats:

The defense pitched a shutout against Cincinnati and has allowed 7 points or less in 3 games. And the Buckeyes rank #3 nationally in sacks, racking up 24 so far this season. They also lead the nation in tackles for loss with 52 and have made 7 interceptions.

Ohio State will get it’s first real test of the season as the Michigan State Spartans come to town on Saturday.

The Spartans also have one of the best defenses in the country this season:

But Ohio State is favored in this game at -20. Can the Spartans slow down the Ohio State offense? We shall see.

My pick to win: Ohio State