QB Joe Burrow threw 5 touchdown passes to 4 different receivers and ran for another as the #5 ranked Tigers dominated the Aggies of Utah State 42-6 in an early game in Tiger Stadium on Saturday.

LSU improved its record to 5-0.

The Tigers, perhaps being sluggish coming off a bye week, got off to a slow start. Burrow threw an INT in the first quarter, only his third of the season. LSU fumbled twice but recovered both. On a 4th and 13, the Tigers were flagged for a personal foul roughing the kicker penalty. This gave the Aggies a new set of downs. Then in the 2nd quarter, after a Derek Stingley interception at the 1-yard line, LSU was backed up in their own endzone and called a running play, barely getting out of the endzone to avoid the safety. 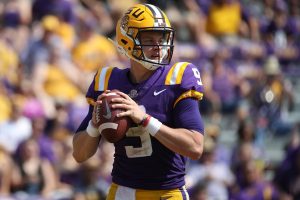 But Burrow remained composed and got the Tigers rolling. He was 27 of 38 for 344 yards and an INT. His primary target, Justin Jefferson, caught 9 passes for 155 yards and 2 TDs. Also, Ja’Marr Chase, Derrick Dillon, and Thaddeus Moss each caught touchdown passes.

LSU had its best game rushing the ball today, gaining 250 yards and controlling the clock. The Tigers had over 41 minutes in time of possession compared to 19 minutes for Utah State.

For the game, LSU gained 601 yards in total offense.

The LSU defense also played their best game of the season, forcing 3 turnovers (3 INTs) and racking up 10 tackles for loss. Utah State gained just 19 yards rushing and 159 total yards for the game. LSU now has 5 INTs in their last 2 games. The Tigers held Utah State scoreless in the second half.

Next week begins the gauntlet of an SEC schedule for LSU, welcoming the Florida Gators into Tiger Stadium next Saturday night. Then they travel to StarkVegas to face Mississippi State, will host Auburn, and after a bye week, will face #1 Alabama on November 9th in Tuscaloosa.

Previous ArticleJustin Fields And A Stout Defense Has The Buckeyes Rolling
Next ArticleThe Good, The Bad, And The Ugly: Week 6