The Tigers had to settle for field goals on their first three possessions after throwing incomplete passes in the endzone on two drives. Midway through the 2nd quarter, LSU was leading by the score of 9-7. 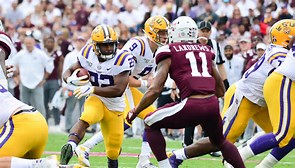 But the Tigers made adjustments and scored 2 more times before halftime, making the score 22-7 at the break. K Cade York missed an extra-point try after bouncing a field goal try off the left upright and through earlier in the game.

Burrow had thrown 6 incompletions in the first half but regrouped to finish strong, going 25 of 32 for 327 yards and 4 TDs and zero INTs.

Those 4 touchdowns went to four different receivers as Burrow set the LSU single-season record for touchdown passes with 29 TDs through the first seven games this season.

WR Justin Jefferson caught 8 passes for 89 yards and a TD, WR Racey McMath had 3 catches for 76 yards and TD, including a 60-yard score in the 2nd quarter. WR Ja’Marr Chase caught 5 balls for 48 yards and a TD, and WR Derrick Dillon was targeted once and scored on a 37-yard TD pass.

But Mississippi State held the Tigers scoreless in the 4th quarter and held LSU to less than 100 yards rushing.

State QB Garrett Schrader was 17 of 28 for 238 yards and 1 passing touchdown and 2 INTs, and he added a rushing touchdown. RB Kylin Hill, one of the top running backs in the SEC coming into the game, was held to just 34 yards rushing and no TDs.

The Tiger defense kept the Bulldogs stymied for most of the game, holding them scoreless in the 3rd quarter. The Tigers also recovered a fumble, recorded 2 sacks and made 2 INTs. The Tigers have now made 8 INTs in the last 4 games.

What hurt the Bulldogs, even more, were penalties, racking up 13 for 109 yards.

To put into perspective just how much the LSU offense has improved this year over last year, take a look at these numbers:

All the above are tops in the FBS.

LSU improves to 7-0 and will face Auburn in Death Valley next Saturday. Kickoff is scheduled for 2:30 pm and will be televised on CBS.

Mississippi State falls to 3-4 and will travel to Texas A&M next week. Kickoff is scheduled for 11:00 am on the SEC Network.

Previous ArticleMiss. State QB Got Helicopter Tackled and the Video is Amazing
Next ArticleThe Good, The Bad, And The Ugly: Week 8