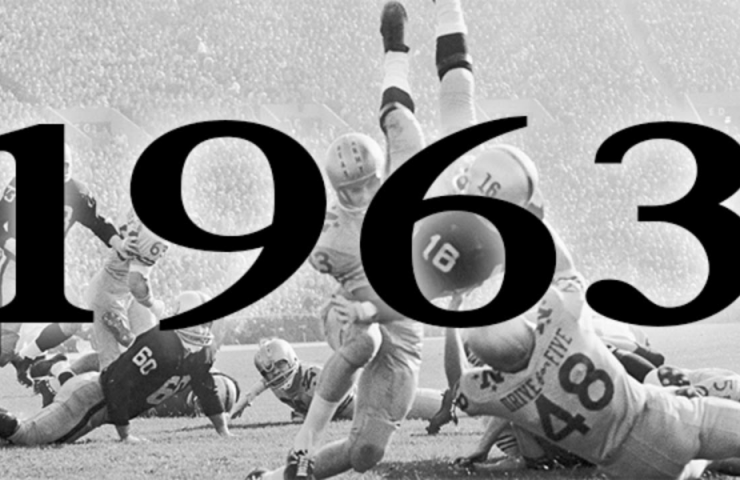 Army vs Navy 1963: A Day in Gridiron History

This week is Army vs Navy game week. Today we remember the 80th anniversary of the surprise attack by the Japanese on Pearl Harbor on December 7, 1941, and the brave Americans who lost their lives that day.

President Franklin D. Roosevelt declared it “a date that will live in infamy” in an address to Congress the next day. A sleeping giant was indeed awakened as the United States was thrust into WWII.

22 years later, on December 7, 1963, two of the storied programs in college football met on the gridiron of battle for the annual Army vs Navy football game.

In 1963, the Army-Navy game was originally scheduled for November 30th. But a horrible and tragic event the week before altered the game schedule, and history.

On November 22, 1963, President John F. Kennedy was assassinated while riding in a motorcade through downtown Dallas, TX. The nation was grief-stricken. Americans across the country mourned the death of our president.

The Army-Navy game was postponed and it was wondered if it would even be played because of the national tragedy that had befallen America. But Jaqueline Kennedy, the former First Lady and the widow of the slain President, insisted that the game be played. It would be a fitting tribute to her late husband, a veteran Navy man of WWII.

The game was rescheduled for December 7th of that year.

Navy had won four straight against Army and was ranked #2 in the country, with only one loss on the season and a five-game winning streak coming into the game. The Midshipmen were led by QB Roger Staubach, who had won the Heisman Trophy a couple of weeks earlier.

That year, Staubach passed for 1702 yards and seven touchdowns, with seven INTs. He also added 371 rushing yards and scored nine TDs on the ground on his way to hoisting the Heisman.

Army was a two-loss team coming into the game. Their defense had pitched four shutouts that season. On offense, the Cadets were led by QB Rollie Stichweh. Stichweh passed for 454 yards and three TDs, with four INTs. He also rushed for 537 yards and three touchdowns.

navy Defense holds on in A Wild Finish

The Midshipmen jumped out to a 21-0 lead on the strength of three Pat Donnelly touchdowns. Stichweh led the Cadets back, scoring a touchdown on a long run that resulted in a tackle that sent Stichweh airborne into the endzone to cut the lead to 21-7 with 10 minutes left in the game.

Stichweh led the Cadets down the field again on their next possession and he scored his second touchdown of the game. He also scored the 2-point conversion to cut the lead to 21-15.

Army lined up for an onside kick and they recovered it. Stichweh led the Cadets down the field to the Navy 2-yard line. The Cadets failed on three downs to get the ball into the endzone for the tying score.

On 4th down and goal, the crowd noise was deafening and the Cadet offense could not hear the signals being called by Stichweh. There was also some misunderstanding as to win the game clock would restart. The clock struck 00:00 before Army could run another play.

The game was over and it was Navy’s fifth straight win over Army.