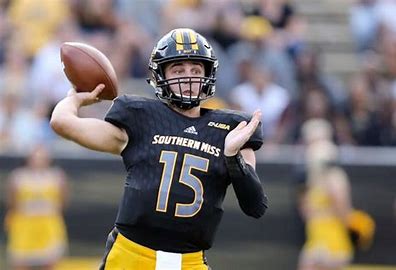 As a football camper in North Carolina, a coach approached him and said “You’ll never be a D-1 QB.” He channeled that statement into motivation to silence his critics. Who was that football camper? It was Jack Abraham, senior quarterback for the Division 1 Southern Miss Golden Eagles.

Abraham played at Oxford High School in Oxford, MS. During his senior year, he had an extraordinary season:

He was motivated more than ever to play Division 1 football. He wanted to prove those so-called “experts” wrong.

To improve his game, Abraham enrolled at Northwest Mississippi Community College. As the starter at quarterback, he led his team to an 8-3 record. His stats were solid: 2949 yards and 23 TDs.

He then enrolled at Louisiana Tech. But his stay would be shortlived after redshirting.

Abraham arrived on the campus of Division 1 Southern Miss in Hattiesburg and played in nine games for Golden Eagles in 2018. His stats looked like this:

The Golden Eagles won their last two games and finished 6-5.

Southern Miss would ride the momentum of winning their last two games of 2018 into the season opener of 2019 against Alcorn State, which the Golden Eagles won 38-10.

Jack led an offense that led C-USA in passing offense at 289 yards per game.

The Coronavirus has cast a huge pitch-black shadow over the 2020 college football season. Schools are moving football to the spring, conferences declaring to play conference games only, some canceling seasons altogether. But if we do play, the Golden Eagles will have some weapons on offense.

Abraham will have some talent at wide receiver. Tim Jones (73 catches for 902 yards and 3 TDs) and Jaylond Adams (48 catches, 483 yards, 2 TDs). Adams is also a threat to score each time he touches the ball on kickoff and punt returns.

Abraham will also benefit from the addition of new Offensive Coordinator Matt Kubick, formerly of Louisiana-Monroe. Kubick guided a Warhawk offense that ranked 17th in FBS in total offense at 460 yards per game.

If the Golden Eagles can improve their ground game to go with will most certainly be a potent passing attack, Southern Miss will be a force to be reckoned with in C-USA in 2020.

**Some material for this article sourced from The Hattiesburg American, “A Look at Southern Miss Quarterback Jack Abraham Through the Years” by Alex Orazco, September 20, 2019. Updated October 17, 2019.**