Home » Texas vs Oklahoma: 100 Years of Rivalry, Shootouts, And Showdowns

Texas vs Oklahoma: 100 Years of Rivalry, Shootouts, And Showdowns

In college football, one of the most heated rivalries exists between the Texas Longhorns and the Oklahoma Sooners.

Texas holds a 62-47-5 advantage in the series and these two blue bloods of college football have combined to produce the following:

This rivalry began in 1900 and has been played annually since 1929. And during the 100 years of this rivalry, Texas and Oklahoma have produced some notable players:

Some legendary coaches have left their mark on this game as well, including Bud Wilkinson, Darrel Royal, Barry Switzer, Fred Akers, Bob Stoops, and Mack Brown.

And this year, the game should continue to live up to the hype. Texas (4-1) is currently ranked #11 in the AP Poll and Oklahoma (5-0) is ranked #6. In 2018, with 0:09 seconds left, Texas beat the Sooners 48-45 on a 40 yards field goal by freshman kicker Cameron Dicker. But Oklahoma avenged that loss in the Big 12 title game, beating the Longhorns 39-27 and moving on to the College Football Playoff. 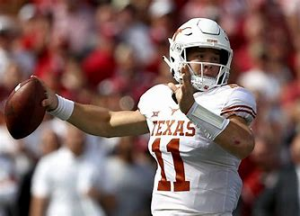 The Sooners are led by QB Jalen Hurts, who has produced the following offensive numbers:

So far, Texas hasn’t exactly set the world on fire defensively. The Longhorns are allowing opponents just 116 yards per game, but rank near the bottom of the FBS rankings in total defense and passing defense. Statistically, the Sooners are better on defense and are ranked in the Top 50 in three major defensive categories, and are allowing just 19 points per game.

Since 2010, the Sooners have won this game 7 times. The winner of this year’s game will come down to which quarterback has the better performance.

Previous ArticleThe Good, The Bad, And The Ugly: Week 6
Next ArticleLSU vs Florida: 20 Years of “Tigers Win!”