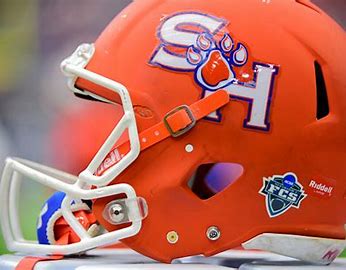 By: Tony Thomas  There was plenty at stake in the FCS quarterfinals game between #2 Sam Houston (8-0) and N. Dakota State. For the Bison, an appearance in the FCS semifinals for the 9th consecutive time. For the Bearkats, it was a 14-0 record in home playoff games. There was history, tradition, and a lot of drama. In the end, Sam Houston beat N. Dakota State (7-3) 24-20 to advance to the semifinal round of the FCS playoffs.

The Bearkats got off to a quick start, as they outscored the Bison 10-0 in the first quarter. North Dakota State was able to muster a safety to get on the board as the score at halftime was 10-2 in favor of the Bearkats.

SHSU scored again to increase their lead to 17-2 in the 3rd quarter. And then something happened that put the 8-time national champs right back into the game.

The Bison ran a kickoff back 94 yards for a TD and two minutes later ran a punt back 76 yards for another TD to tie the score at 17-17.

Late in the 3rd quarter and into the 4th quarter, NDSU would go on a 20-play, 60-yard drive that would take 9:44 off the clock. They converted a field goal to take the lead for the first time in the game 20-17.

With eight minutes left in the game, Sam Houston QB Eric Schmid led the Bearkats on a 9 play, 72-yard drive. On 3rd and 10 at their own 48-yard line, Schmid threw a strike to Ife Adeyi for 47 yards and a first down at the Bison 5-yard line. Two plays later, Schmid scored the go-ahead touchdown on a 6-yard run to put Sam Houston back in front for good 24-20. North Dakota State could not score on their final series as the clock struck 00:00.

The Bearkats are one of three teams that are still undefeated in the FCS playoffs, along with James Madison and Delaware.

Sam Houston will host James Madison in the FCS semifinals on Saturday, May 8th at Bowers Stadium in Huntsville, TX.

Next ArticleSam Houston Advances to the FCS Championship Game