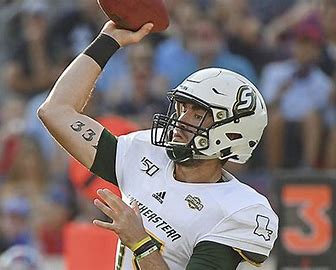 The 6-7, 230-pound transfer from Arkansas threw for 2662 yards and accounted for 27 touchdowns: 18 passing, seven rushing touchdowns, and two receiving TDs. He was #2 in the FCS in passing. He led the Lions to a 4-3 record in the shortened spring season.

Kelley was also named the Southland Conference Player of the Year for the Spring, as well as an FCS All-American by the AP and STATS.

He threw for over 300 yards in every game:

Kelley was also named Offensive Player of the Year and 1st Team All-Louisiana by the Louisiana Sports Writers Association (LSWA).

In 2018, Kelley played in 9 games and started in two. He passed for 455 yards and 5 touchdowns and added three rushing touchdowns.

Kelley was a 4-star recruit and the #16 quarterback, according to ESPN. He was rated as a 3-star recruit by 247sports and Rivals.com.

Kelley posted six games with 3 or more passing touchdowns, including six in a 65-35 win over Northside.

As a senior in 2015, Kelley passed for 3203 yards, 28 touchdowns and 12 INTs. He also added 286 yards rushing and 8 scores. Kelley was named as Honorable Mention 4A All-State and 1st team All-Acadian.

He chose Arkansas over: