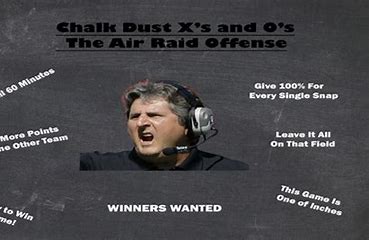 Mississippi State hires Mike Leach and the SEC West will be fun to watch. Leach, the guru of the “Air Raid” offense, was introduced today as the new head football coach of the Mississippi State Bulldogs. Leach had previous success as a head coach at Texas Tech (2000-2009) and Washington State (2012-2019).

His Red Raider teams in Lubbock led the NCAA in passing five times and the Big 12 in passing four times. This was accomplished with the likes of Kliff Kingsbury, Sonny Cumbie, Cody Hodge, and Graham Harrell playing the all-important quarterback position.

As the head man at Washington State, the Cougars led the NCAA in passing four times, with players like Gardner Minshew and Luke Falk at quarterback.

This offense is an updated version of the “old BYU offense.” Leach learned this system as an assistant coach under Hal Mumme at Valdosta State and later at Kentucky. Kentucky set SEC passing records with Tim Couch as the quarterback. But those records were surpassed this year by LSU quarterback Joe Burrow.

Leach runs a fast-paced offense, focused on throwing the ball all around the field. He lines up five wide receivers, running crossing routes and post routes. The running backs will check and release, looking for blitzes, and then release into the flats and become another pass-catcher.

Because those receivers will run those crossing routes as close as they can without touching each other, it forces the defenders to go around them, disrupting the pass coverage.

How the SEC West Has Changed

Adding Leach to the SEC West most certainly makes it the most passing-efficient and most offensively-explosive division in college football.

Because that division already has Nick Saban and the now pass-happy Alabama Crimson Tide. Ed Orgeron and the prolific LSU offense (designed by Joe Brady), is playing for the National Championship against Clemson on Monday night.

Quarterback guru Jimbo Fisher has the Aggies of Texas A&M going in the right direction and will have QB Kellen Mond returning next year. Gus Malzahn (with Chad Morris as OC) will have the Auburn Tigers ready to play behind QB Bo Nix.

And, with Lane Kiffin as the head man at Ole Miss, he has John Rhys Plumlee and Matt Corral to work with at quarterback.

Leach was humorous and highly entertaining during his 45-minute press conference. Leach rang the cowbell, referenced Mississippi State Baseball Coach Ron Polk, and answered the media’s questions with wit and humor. And, his storytelling drew applause and laughter from the crowd in attendance. SEC Media Days this summer should be a hoot once Leach takes the podium.

As for the current roster, Leach inherits a team that returns experience at quarterback, running back, wide receiver, and linebacker. QB Garret Schrader returns for his sophomore season after throwing for 1170 yards and 8 touchdowns and 5 interceptions. Schrader also rushed for 587 yards and 6 touchdowns.

RB Lee Witherspoon returns at running back. Wide receiver Osirus Mitchell returns for his senior season. Mitchell led the team in receiving with 29 catches for 430 yards and six touchdowns.

And on defense, linebacker Erroll Thompson will return. He led the team in tackles with 84. And, the entire secondary, minus Cameron Dantzler, will return next season.

The Bulldogs lost QB Tommy Stevens to graduation, and RB Kylin Hill and Dantzler have declared for the 2020 NFL draft.

Material for this article sourced from cfbstats.com, sports-reference.com, smartfootball.com