LSU is headed to the SEC Championship as a result of their 56-20 win over Arkansas on Saturday night in Death Valley. The Tigers improved to 11-0.

The Tigers stormed out to a 28-6 halftime lead. LSU was leading 56-6 late in the fourth quarter but the Razorbacks scored the final two touchdowns to cut the lead to 56-20.

LSU racked up 612 yards of total offense. Over the last 7 quarters, the LSU offense has gained 1254 yards and scored 107 points. 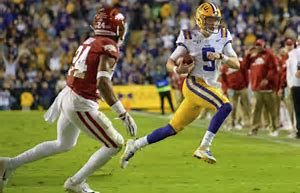 RB Clyde Edwards-Helaire ran for 188 yards on just 6 carries and 3 touchdowns, including an 89-yard  run for a score. He also caught 7 passes for 65 yards. RB John Emery added a touchdown on a 39-yards run. RB Tyrion Davis-Price added another touchdown. 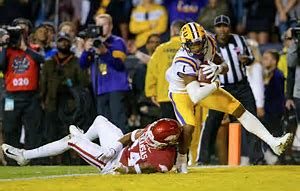 LSU became the first team in SEC history to produce a 4000-yard passer, a 1000-yard rusher, and two 1000-yard receivers in the same season.

First-half Domination By The Defense

The Tigers defense has yet to play a full 60-minute game this season. They did limit the Razorbacks to 100 yards total offense in the 1st half and less than 3 yards per carry, but Arkansas would finish with 304 yards for the game. Jacoby Stevens led the Tigers with three sacks.

LSU now will focus on Texas A&M, who comes into Death Valley next Saturday night. The Aggies gave Georgia all they could handle but lost to the Bulldogs 19-13 in a sloppy, rain-soaked game.

The LSU Tigers are headed to the SEC Championship Game. It’s their first appearance in the conference title game since 2011.