Home » LSU And The History Of D.B.U: From The Soul Patrol To The Honey Badger

LSU And The History Of D.B.U: From The Soul Patrol To The Honey Badger 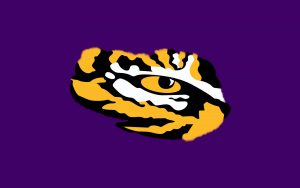 LSU is a storied football program that has enjoyed tremendous success on the football field over the years and it has rich traditions. One of those traditions can be described with just three letters: D.B.U.

But before it was brought into the mainstream, the foundation for what D.B.U. would become can be traced all the way back to the 1978 football season. That year, a group of players in the LSU defensive secondary would have a very productive season. Chris Williams, Willie Teal, Marcus Quinn, and James Britt, nicknamed the “Soul Patrol”, recorded 16 INT’s as a unit. From 1978-1980, they would go on to record a total of 33 INT’s. Of the four, Williams would have the most productive career in a Tiger uniform: he is the SEC career leader with 20 INT’s, which ranks 10th all-time in NCAA history.

Since 1982, the Tigers have recorded double-digit interceptions in 15 of the last 36 seasons.

But the best was yet to come.

Fast forward to 2002. Coach Nick Saban, a defensive-minded coach, had been in Baton Rouge for 2 years, after taking over for Gerry DiNardo. Players Corey Webster, Damien James, and Demetrius Hookfin were now roaming Death Valley, and as a unit recorded 14 INT’s that year.

From 2002 to 2007, in addition to Webster, James, and Hookfin, other players such as LaRon Landry, Chevis Jackson, Craig Steltz, and Johnathan Zenon, and Chad Jones would contribute to record a total of 57 INT’s and win 2 BCS National Championships.

Then in 2008, a player by the name of Patrick Peterson would arrive on campus and the moniker of D.B.U. would really begin to stick. That year, Peterson would only nab one interception, but his play on kickoff and punt returns made him stand out. Peterson returned 32 KO’s for 932 yards, for an average of 29 yards per return that year.

And from to 2008-2012, Peterson, along with Tyrann Mathieu, nicknamed The Honey Badger, Mo Claiborne, Eric Reid, Tharold Simon and other great Tiger DB’s would steal 61 INT’s, record 51 wins vs 15 losses, and finish in the Top Ten in the AP Poll twice.

Since 2006, eight Tiger DB’s have earned Consensus All-American honors, and seven have gone on to play in the NFL:

2019 looks to be another promising year for the Tigers, with Delpit, Kristian Fulton, and true freshman Derek Stingley, Jr. all preparing to carry on the tradition that is D.B.U..

Previous ArticleA Look Back: Reggie, Sammy, and the 1981 Southern Miss Golden Eagles
Next ArticleWeekly Recap: Gators vs Canes: The Good, The Bad, And The Ugly