Home » Cougars Win Their 10th Straight of the Season 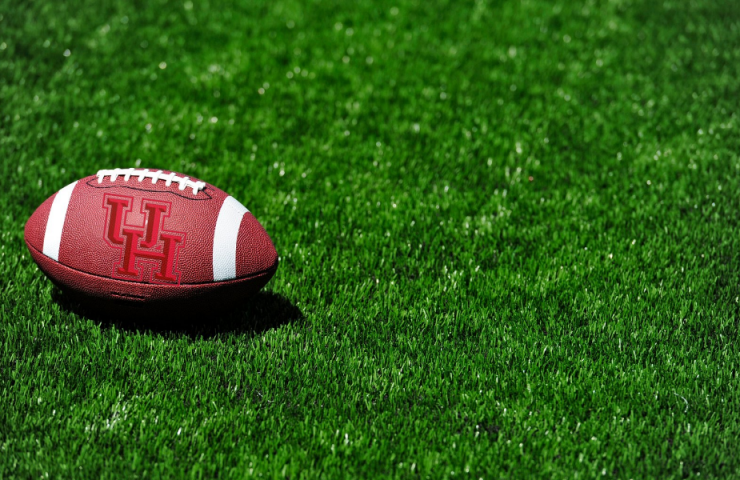 Cougars Win Their 10th Straight of the Season

The Memphis Tigers rolled into Houston on Friday night, looking to play the spoiler role in the Houston Cougars magical 2021 season. But that game plan was spoiled as the Cougars jumped out to a 21-3 halftime lead, en route to a 31-13 win, their 10th straight win.

It was the Cougars’ 10th straight win since a Week 1 loss to Texas Tech. Coming into the game, Houston QB Clayton Tune hadn’t thrown an interception in 167 consecutive pass attempts (over his last five games) and was completing 69% of his passes.

But in the win, Tune was a little out of tune as he threw two INTs and completed 58% of his passes. He finished the game with 264 yards passing and a touchdown. Tune showed off his mobility for a 6-foot 3 quarterback by adding a 20-yard touchdown run.

Tune now has 2712 passing yards on the season, with 22 touchdowns and 8 INTs.

On the opening series of the game, Houston leading tackler Donovan Mutin was injured trying to make a tackle. He laid motionless on the field for several minutes before being placed on a stretcher and carted off the field. It was reported he was moving his hands and fingers.

Mutin was placed in an awaiting ambulance and taken to Memorial Hermann Medical Center. It was later reported by the ESPN broadcast team that Mutin was alert and talking.

Before the game even started, both teams had to be separated after words were exchanged between players in pre-game warmups. That chippiness spilled over into the game.

Memphis punted on their first possession, and the Cougars mounted a 10-minute, 19 play drive. But Houston shot themselves in the foot on that drive, committing two holding penalties that negated positive yardage gains, and gave up a sack of Tune.

The Cougars were forced to attempt a 50-yard field goal. But they came away with zero points when the kick sailed wide left.

Houston got it going in the 2nd quarter. Freshman RB Alton McCaskill (6-1, 210, Conroe, TX) sidestepped a would-be tackler in the backfield that looked like it would be a loss on the play and burst up the middle for a touchdown (15th rushing touchdown) to put the Cougars up 7-0.

After Memphis converted a 28-yard field goal to cut the lead to 7-3, Tune found WR Nathaniel Dell for a 19-yard touchdown strike to make the score 14-3.

The injury bug struck again for the Cougars as McCaskill was knocked out of the game with a shoulder injury. He did not return.

Tune added his 20-yard touchdown scamper with less than a minute to go in the first half to increase Houston’s lead to 21-3 going into halftime.

Memphis Couldn’t Keep Up with the Joneses

Coming into the game, Houston DB Marcus Jones had three INTs to his credit to go along with 38 tackles. Jones made his presence known in the second half, intercepting a pass by Memphis QB Seth Henigan on their first possession of the 3rd quarter.

The Cougars did not take advantage of the turnover and certainly did not execute. Two consecutive holding penalties on the ensuing drive put Houston in a tight spot with a 1st down and 30-yards to go. Later in the possession, Tune threw the first of his two INTs.

Memphis took advantage of the turnover, with the help of a targeting penalty and then an unsportsmanlike conduct penalty on, wait for it, Houston HC Dana Holgersen. Not exactly a beacon of leadership at that moment.

Later on in the drive, on 1st and goal, Henigan connected with his running back on a TD pass to make the score 21-10.

At the start of the 4th quarter, Memphis added a field goal to reduce the deficit to 21-13. It would be the last of the scoring for the Tigers.

Henigan finished the game with 208 yards passing (100 yards below his season average) and 1 touchdown. He threw two INTs.

The first two drives of the 4th quarter for the Cougars resulted in another INT by Tune and a punt. Later, they converted a field goal and added another TD run by RB Ta’Zhawn Henry to make the score 31-13. And that would be your final score.

Up until the 1:43 mark of the 4th quarter, Memphis had zero yards in the quarter. At that point, Henigan reeled off nine yards on a quarterback run. Four plays later, Jones intercepted Henigan for the second time in the game.

Jones now has five INTs on the season and has intercepted at least one pass in each of the last four games.

The Cougars’ defense held the Tigers out of the end zone from a rushing attack perspective, allowing zero rushing touchdowns in the game. And, they sacked Henigan twice and recorded six tackles for loss.

All the above was par for the course for a Houston defense ranked #6 in the FBS in Total Defense, #8 in Rushing Defense, and tied for 4th in Turnover Margin.

Some stats that stood out in the game:

The Cougars have already secured a spot in the American Athletic Conference Championship Game on December 4th. Their opponent has yet to be determined.

Houston travels to take on UConn (1-9) next week in the final regular-season game.

Previous ArticleThe AAC Has Some Good QB’s Returning in 2021