Home » Burrow Leads LSU Into “StarkVegas” To Take On The Bulldogs

Burrow Leads LSU Into “StarkVegas” To Take On The Bulldogs

The #2 ranked LSU Tigers are clicking on all cylinders offensively and are getting better each game on the defensive side of the ball as they travel to Starkville, MS to take on Mississippi State on Saturday. Kickoff is at 2:30 pm.

The Tigers are 6-0 on the season and are coming off an impressive 42-28 win over previously #7 ranked Florida. It was LSU’s second win of the season against a Top Ten ranked opponent, having beaten Texas who was ranked #9 at the time, in week 2. 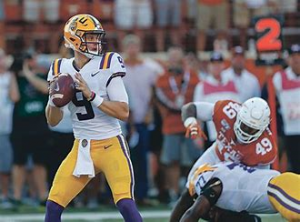 The high-powered LSU offense, which has scored 40 or more points in every game, is led by Sr. QB Joe Burrow. Burrow is ranked #2 nationally in passing at 359 yards per game. Through 6 games, he has thrown for 2157 yards and 25 TDs and only 3 INTs.

And because of his stellar play, Burrow is now considered the front-runner for the Heisman Trophy.

With WR Terrence Marshall out for an extended period of time, WR Justin Jefferson and WR Ja’Marr Chase are getting the bulk of the catches. Jefferson has 670 yards and 8 TDs and Chase has 578 yards and also 8 TDs on the season.

The LSU offense has been so much fun to watch this season, compared to much of the last decade when the Tigers were a Pro-Style, run between the tackles type of offense. This year’s numbers are simply amazing:

The Tigers can run the ball and be more balanced when they need to with RB Clyde Edwards-Helaire, RB John Emery, and RB Tyrion Davis-Price splitting the carries. But make no mistake, LSU is a pass-first team.

The Tiger “D” is getting better every week. They currently rank #13 nationally in rushing defense, allowing teams just 91 yards per game on the ground. They have also recorded 40 tackles for loss and 15 sacks.

D.B.U. got off to a slow start this season, having zero interceptions through the first 3 games. But they have come on strong here lately and have recorded 6 INTs in the last 3 games. DB Derek Stingley has 3 of those interceptions.

Mississippi State beat the Tigers in StarkVegas in 2017 by a score of 37-7 and comes into this game with a 3-3 record after losing to Tennessee last week. The Bulldogs have used two quarterbacks at various times this season, Tommy Stevens and Garrett Schrader and they have combined to throw for only 8 TDs and 6 INTs.

RB Kylin Hill leads the ground attack for Mississippi State, having rushed for 609 yards and 5 TDs, averaging 5 yards per carry.

Bulldog WR Osirus Mitchell is the leading receiver and has caught 24 passes for 335 yards and 4 TDs.

To add some distraction to this week’s game prep, Bulldog Head Coach Joe Moorhead is rumored to be the front-runner for the head coaching job at Rutgers.

But Moorhead has stated he is not interested. We shall see as the second half of the season winds down and the coaching carousel begins in earnest after bowl season.

The Tigers are 18 point favorites in this game and will win handily, keeping their consecutive games of 40 or more points scored streak alive. Also, look for Burrow to break the LSU single-season record for TD passes (28).