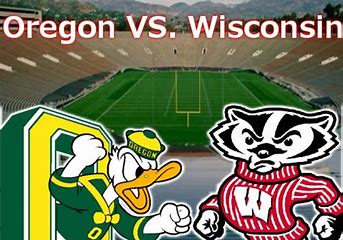 The Rose Bowl-the best of the New Year’s 6 bowl games. There has been some great football played in bowl games this year, but Oregon’s 28-27 win over Wisconsin was fun to watch.

Oregon got the ball to start the game and promptly drove down and scored on a four-yard run by QB Justin Herbert.

But on the ensuing kickoff, Wisconsin kick returner Aron Cruickshank fielded the kick, navigated through traffic, and raced down the right sideline 95-yards for a touchdown to tie the score at 7-7. The Badgers added a field goal to take a 10-7 lead into the second quarter.

Herbert would score his second rushing touchdown in the 2nd quarter to give Oregon their first lead of the game at 14-10.

But Wisconsin scored again at the end of the second half, on an 11-yard pass from QB Jack Coan to Qunitez Cephus to take a 17-14 lead into halftime.

The Badgers received the second-half kickoff. On that possession, Wisconsin fumbled and the Ducks’ Brady Breeze recovered it returned it 31-yards for a  touchdown to take the lead again 21-17 into the fourth quarter.

It was one of four turnovers for the Badgers in the game.

But Wisconsin would score 10 more points to take the lead back at 27-21. Oregon moved the ball down the field and at the 7:41 mark of the final period, Herbert would score his third rushing touchdown of the game on a 30-yard run to give Oregon the lead for good at 28-27.

Because Wisconsin turned the ball over on downs, Oregon was able to convert to a first down and run out the clock for a thrilling victory.

Herbert rushed for 29 yards on 9 carries and three rushing touchdowns. He was 14 of 21 passing for 138 yards and a touchdown with one interception.

The Ducks defense made the plays when they needed to. In addition to the fumble recovery for a TD by Breeze, Oregon recovered two more fumbles and forced an interception.

Wisconsin gained 322 total yards: 136 rushing and 186 passing. RB Jonathan Taylor had 21 carries for 94 yards and two touchdowns. And, he eclipsed the 2000 mark on the season, gaining 2003 yards and scoring 21 rushing touchdowns.

In his three-year college career, Taylor now has 6,174 rushing yards and 50 touchdowns. That puts him at #4 on the NCAA all-time rushing list. Because he is an NFL draft-eligible junior, it is unknown if he will return for senior season, or take his talents to the next level. 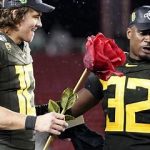 As a four-year starter at Oregon, Herbert is one of the top quarterback prospects in the upcoming NFL Draft. Herbert finished the season with 3,471 yards and 32 touchdowns and only 6 interceptions. His career numbers are 10,541 yards passing, 95 touchdowns and 23 interceptions.

The Best of the New Year’s 6 Bowl Games

Material for this article sourced from sports-reference.com