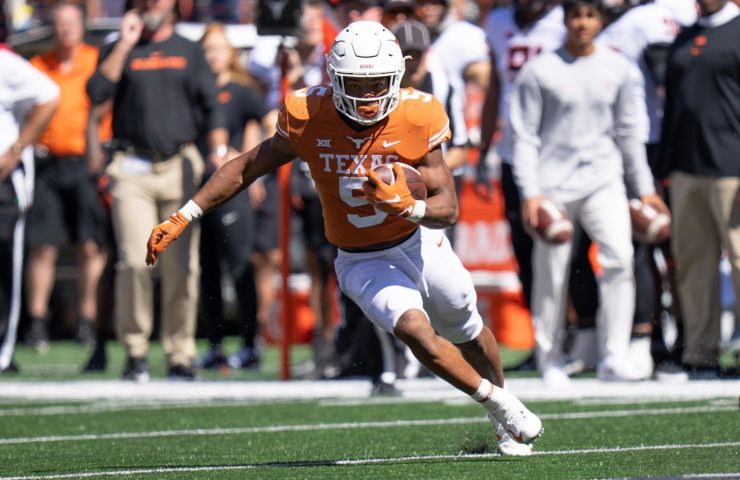 After a stellar college career on the Forty Acres, Texas RB Bijan Robinson has declared for the 2023 NFL Draft and will skip the Alamo Bowl vs Washington.

The former 5-star recruit from Tucson, AZ is projected as a 1st round pick in the Top Ten in early mock drafts.

Bijan Robinson-#1 high school Running Back in the Country

As a former prep star in Arizona, Robinson was the #1 running back in the country, according to 247sports.com.

He garnered 21 scholarship offers from the top football programs in the country, including:

He signed with the Longhorns in the class of 2020, just in time for the COVID-19 pandemic.

In nine games during his freshman season, he rushed for 703 yards and four touchdowns. He averaged 8-yards per carry.

Robinson followed up with a sophomore season that produced 1127 yards and 11 touchdowns.

In fact, Robinson averaged 6 yards per carry in 1/2 of his games this season.

In a 41-20 win over UTSA, Robinson scored three rushing touchdowns while rushing for 183 yards.

Robinson led the Big XII in rushing (1580 yards), averaging 131 yards rushing per game. He was named 1st Team All-Big XII and was named Consensus All-American by the American Football Coaches Association (AFCA). He was also named All-American by:

Robinson is only the fourth Longhorns running back in school history to be named Consensus All-American. The others were James Saxton in 1961, Earl Campbell in 1977, and Heisman Trophy Winner Ricky Williams in 1997-1998.

Robinson is among the great texas Running Backs

His performance in 2022 allowed him to move past Jamaal Charles for #4 on the school rushing list.