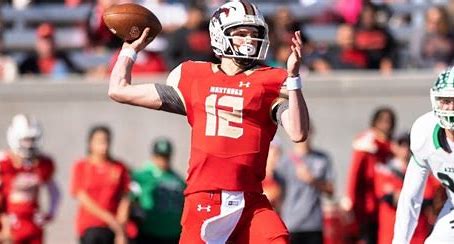 He is a 4-star quarterback from Coronado High School in Lubbock, TX. After receiving 16 scholarship offers, he signed with Mike Leach and Mississippi State in December. He is Sawyer Robertson, the newly anointed Texas Gatorade of the Player.

Sawyer Robertson-What is Mississippi State Getting

The Bulldogs get a 6-3, 200-pound quarterback that ran an offense at Coronado similar to the Air Raid scheme perfected by Leach.

Robertson burst onto the scene as a sophomore and did not disappoint as the Mustangs went 10-3:

He didn’t throw an interception until Week 6.

Sawyer Roberston-Player of the Year in 2020

Robertson was a 2nd Team All-State selection in 2020. He was named the 5A Built Ford Tough Player of the Year, along with the aforementioned Gatorade honor.

Coach Leach went into his old stomping grounds of Lubbock, where he coached for 10 years with Texas Tech, and stole a good one from the Lonestar State.

Roberston will be part of a Bulldog quarterback room that also includes sophomore Will Rogers and Southern Miss transfer Jack Abraham.

Material for this article sourced from: