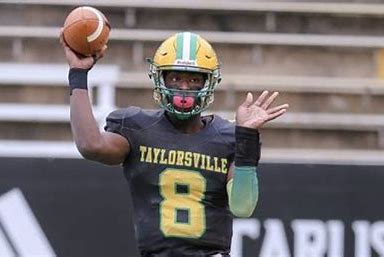 QB Ty Keyes-Can He Take Southern Miss to the Top?

By: Tony Thomas  Shortly after head coach Will Hall accepted the job with the Golden Eagles, he signed one of the highest-rated, most talented recruits ever to pledge to Southern Miss in QB Ty Keyes of Taylorsville.

Keyes was rated a 4-star recruit and Top 300 player by ESPN and the #7 dual-threat quarterback in the country.

A 3-time Mr. Football in Mississippi (2018, 2019, 2020) and the 2019 Mississippi Gatorade Player of the Year, Keyes started to light it up as soon as he stepped foot on the football field his freshman year. Statistically, his very first year at Taylorsville was his best.

Keyes threw for 4562 yards, 45 passing TDs, against only 8 interceptions. He also added 543 rushing yards and 8 scored on the ground, leading Taylorsville to a State Championship. His stats:

Won the first of three Mississippi Mr. Football awards. Keyes threw for 3736 yards 39 TDs and 7 INTs. He also rushed for 335 yards and 4 TDs.

Keyes finished his final high school season with 2546 yards passing, 30 TDs, and 3 INTs as a senior. He also rushed for 560 yards and six touchdowns.

He took home his third Mr. Football award and led Taylorsville to a 55-3 record during his four years as a starter.

For his high school career, Keyes passed for 14,565 yards and 155 touchdowns, with only 25 INTs. He also added 1860 career rushing yards and 22 touchdowns on the ground.

Keyes first committed to Tulane. But when Hall was hired to lead the Southern Miss football program, Keyes de-committed from the Green Wave and signed with Hall and the Golden Eagles.

The Ty Keyes to Victory for the Golden Eagles in 2021?

Can Keyes win the starting job in fall camp? That remains to be seen. But the talent and the athleticism can’t be denied. The quarterback battle in August should be fun to watch.

To say that the kind of athleticism that Keyes possesses could come in handy would be a gross understatement, especially when you consider that the Golden Eagles’ best year over the last decade in the passing department was #12 in the FBS in 2015 when they averaged 329 yards per game. They also ranked 12th in total offense that year, averaging 509 yards per game. Over the last four years, Southern Miss hasn’t ranked higher than 43rd nationally in total offense.

So obviously there is a ton of room for improvement in all areas, offensive scheme, coaching, player development, and recruiting. Signing Keyes is a good start for Hall right out of the gate.

Once fall camp starts, maybe Keyes can be the catalyst that takes Southern Miss to the Top in 2021.

Material for this article sourced from cfbstats.com, maxpreps.com.

8 Replies to “QB Ty Keyes-Can He Take Southern Miss to the Top?”