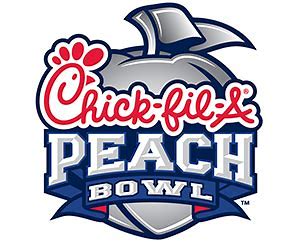 The offensive juggernaut that is the 2019 LSU Tigers continues to steamroll opponents. And this time it was the Oklahoma Sooners in a decisive 63-28 win in the Chick-Fil-A Peach Bowl. With the win, LSU advances to the title game.

This Game Wasn’t Even Close. 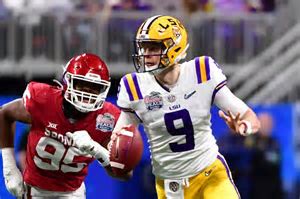 QB Joe Burrow played like he has all season. He was 29 of 39 passing for 493 yards and 7 touchdowns with no interceptions and added 1 rushing touchdown. And, he completed 74% of his passes.

LSU won the coin toss and elected to defer to the second half, giving the Sooners and QB Jalen Hurts the ball first on offense. But on the first play from scrimmage, the LSU defense sacked Hurts. This set the tone for the rest of the game.

And, the next two plays were loss of yardage plays, forcing a 3 and out and a punt. The Sooners shanked the punt, giving LSU great field position.

It took all of 0:52 seconds for Burrow to find WR Justin Jefferson for LSU’s first score and they never looked back. The Tigers led the game from start to finish, racing out to a 21-7 lead at the end of the first quarter and a 49-14 lead at halftime. 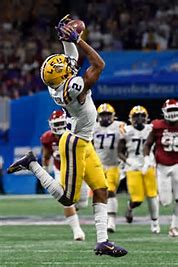 Jefferson would finish the game with a CFP record 227 receiving yards and four touchdowns. WR Terrance Marshall added 6 catches for 80 yards and 2 touchdowns, and TE Thaddeus Moss added 4 catches for 99 yards and a score.

RB Clyde Edwards-Helaire, a game-time decision because of an injured hamstring, was limited to a couple of plays.  RB Chris Curry got the bulk of the touches from a rushing standpoint, carrying 16 times for 89 yards, averaging 5.6 yards per carry. Curry’s bruising style of running was a stark contrast to the slashing, spinning style of Edwards-Helaire.

As a much-improved unit since the Ole Miss game, the LSU defense sacked Hurts twice and intercepted him once. But also, the Tigers forced a three-and-out on five Sooner possessions in the first half. LSU held the Sooners to 322 total yards of offense, well below their season average of 554 yards per game. Hurts was under constant pressure the entire game.

Hurts’ final collegiate game did not go as he would have liked. He was 15 of 31 passing for 217 yards and no touchdowns, with one interception. Hurts completed 48%  of his passes. But he scored two rushing touchdowns, carrying 14 times for 43 yards.

Kennedy Brooks and T.J. Pledger added one touchdown each for the Sooners.

As for Oklahoma’s dynamic playmaker CeeDee Lamb, he caught four passes for 119 yards but was kept out of the endzone.

LSU Advances to the Title Game

So LSU will play in the title game and will face the Clemson Tigers, 29-23 winners over Ohio State. The game will be played in the Mercedes-Benz Superdome in New Orleans, La. on January 13th. Because the Superdome is just 60 miles down I-10 from the LSU campus, it will certainly seem like a “home game” for Burrow and the boys.

This is LSU’s first appearance in the college football playoff, and Clemson’s fifth appearance. Clemson has won two national titles in the playoff era, in 2016 and 2018. But this will be the LSU’s fourth appearance in the national championship game, and all have been played in the Mercedes-Benz Superdome.