Home » Mike Singletary-He Left It All on the Field 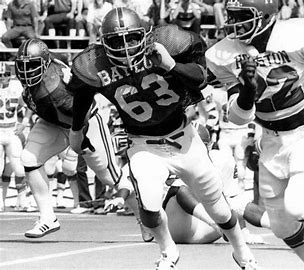 Mike Singletary-He Left It All on the Field

Imagine you’re sitting in the stands, staring out over 100-yards of chewed-up green turf, the smell of hotdogs and popcorn in the air, as you witness bone-crushing tackles. And if you were a fan of the Baylor Bears in the late 1970s, this is what you experienced when Mike Singletary played linebacker in the old Southwest Conference (SWC). He gave 100% on every play.

Work Hard Because Nothing Is Free.

He played with a wide-eyed intensity and a one-of-a-kind work ethic that prepared him to be in the right place at the right time on every play…so he could deliver a face mask straight into your sternum with such force that the play more often than not resulted in a loss of yards.

At 6-0, and less than 200 pounds, Singletary played his high school ball at Houston Worthing, where he was an All-State performer as a 9th grader. When he was a senior, the coaching staff at Baylor watched his game film. They watched nine different plays and they noticed one common theme on each play: he played with intensity. He made tackles from sideline to sideline. That was all they needed to see.

Once at Baylor (1977-1980), he made a name for himself. He played with speed, intimidation, and a physicality that became the stuff of legend. It is said that Singletary kept the equipment staff on their toes because he was breaking helmets with some regularity: 16 in four years. The equipment managers had to keep 4-5 extra helmets for him, just in case.

Singletary terrorized opposing players to the tune of a whopping 232 tackles. He posted multiple games with over 30 tackles and was named All-Southwest Conference.

Mike set the tone for the season when he made 21 tackles in the season opener vs Lamar. He registered 188 tackles for the season and was named the SWC Defensive Player of the Year and also named Consensus All-American. He made all-SWC for a second time.

With 145 tackles in the ’80 season, he was named a Consensus All-American and the Defensive Player of the Year yet again, along with another All-SWC selection.

The Baylor defense played lights out, allowing just 129 points over 11 games, helping to lead the Bears to an SWC Championship. The Bears ranked as high as #6 in the AP Poll that season before falling to #14 in the final poll.

While in Waco, Singletary made an extraordinary 662 tackles. Not too shabby for an undersized linebacker. As a result, he was drafted in the second round of the 1981 NFL Draft by the Chicago Bears.

Mike Singletary-A Monster of the Midway

Number 50 in the Chicago Bears program, Singletary continued his fierce play at Soldier Field for a Bear’s defense that was destined for greatness. He thrived in Buddy Ryan’s “46” defense, one that featured multiple future NFL Hall of Famers, including Singletary himself. The Bears won the Super Bowl in 1985.

Most NFL so-called dominant defenses are held to the standard set forth by the ’85 Bears.

Arguably the best linebacker ever to play the position, Singletary had a cerebral approach to the game of football by studying the film of the opponents and constantly working on his technique. He also made sure to know the assignments of his defensive teammates as well.

When you combine both his college and pro careers, Singletary made an astounding 1547 tackles.

His was ready to make a play on every snap, and he took his job seriously. And, he did it with a vengeance.

Material for this article sourced from: