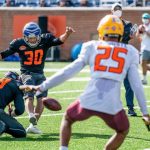 As one of the most accomplished kickers in school history, Patterson’s stats are solid:

Under Executive Director Jim Nagy since 2018, 186 players have been drafted (and 80 in the first three rounds), the best two-year draft record in the Senior Bowl’s 72-year history.