The Louisiana Tech Bulldogs (8-3, 5-2 in C-USA) will be looking to bounce back from a couple of C-USA road losses and snap a two-game losing streak this Saturday hosting UTSA on Senior Day. Kickoff is at 2:30 pm from Joe Aillet Stadium. UTSA is 4-7, 3-4 in C-USA.

The Bulldogs enter the game in a three-way tie for first place in C-USA’s West Division. They can clinch the division with a win and a loss by UAB to North Texas.

La. Tech will celebrate 23 seniors on Saturday, a class that has 32 wins in four years. The Bulldogs are bowl eligible for the sixth straight consecutive season under head coach Skip Holtz. Tech’s streak of five straight bowl wins is tied for the longest in the nation (with Wisconsin).

Tech has scored 35+ points in 6 of their last 9 games and has put up 40+ points in five games this year. They average 33 points per game, good for second in C-USA.

But at home, Tech is averaging 45 points per game in the cozy confines of Joe Aillet Stadium.

On the defensive side of the ball, the Tech defense leads the nation in red-zone efficiency, as they are holding opponents to a 63% success rate in the red zone. The Bulldogs are ranked ahead of Florida, Temple, Georgia, and Ohio State to round out the top five. 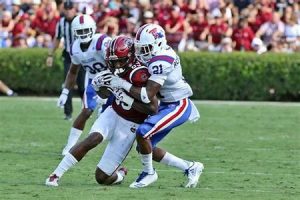 Jr. CB Amik Robertson leads the FBS with 21 passes defended and ranks fifth nationally with 5 interceptions. For his career, Robertson has 14 interceptions. That is good enough for #5 in school history and it is the most among FBS active career leaders. He also has three pick-sixes to his credit.

Tech has forced at least one turnover in 15 straight games, which is the nation’s longest streak. They have forced six turnovers in their opponent’s red zone this season.

RB Justin Henderson has rushed for 862 yards, with 15 touchdowns scored on the ground (7th most nationally). 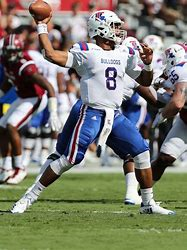 QB J’Mar Smith ranks #4 all-time in school history with 9,029 yards and is 34 yards shy of the #3 spot currently held by Justin Martin.