Clemson would take the ball first to start the game and would score midway through the first quarter to take an early lead at 7-0 on a short run by Clemson QB Trevor Lawrence.

After punting on their first three possessions, LSU would answer with a score of their own. Late in the first quarter, QB Joe Burrow would connect with WR Ja’Marr Chase on a 52-yard pass for a touchdown to tie the game at 7-7 at the end of the opening period.

In the second quarter, Clemson would increase their lead. They connected for a field goal and would later go 96-yards in four plays. A 29-yard run by RB Travis Etienne and a 36-yard run by WR Tee Higgins for a touchdown brought the Clemson lead to 17-7.

But LSU would answer with a touchdown run by Burrow on 3rd and goal to get within three points at 17-14. On Clemson’s next possession, their drive stalled and were forced to punt.

The LSU Tigers would keep the lead for good.

LSU would then go on a 95-yard drive, culminating in a touchdown pass to TE Thaddeus Moss to take a 28-17 lead into halftime. LSU held Lawrence to 176 yards passing and zero touchdowns in the first half.

The Tigers from Baton Rouge received the second-half kickoff. But Burrow would be sacked on 3rd and four and were forced to punt, going three and out.

Clemson promptly moved the ball downfield on their next possession, aided by a personal foul-facemask penalty on K’Lavon Chaisson. They would score on a touchdown run by Etienne to cut the LSU lead to three at 28-25.

Turning Point of the Game

To make matters worse, Clemson LB James Skalski was flagged for targeting and ejected. It became first and goal and LSU increased its lead at the 5:13 mark of the third quarter with another touchdown pass to Moss. The score was 35-25. Skalski had been a force in the middle of the Clemson defense all night up to the point he was ejected.

LSU took a shot to the endzone with one on one coverage with Chase, but Chase could not hold on to the ball in the endzone. They would try a field goal but it was no good. The score remained 35-25 at the end of the third quarter.

Burrow would throw another touchdown pass, this time to WR Terrace Marshall to increase the lead further to 42-25.

Another Clemson drive would stall after moving the ball with the aid of two LSU pass interference penalties. Clemson would punt yet again.

The ensuing LSU drive would stall and LSU would punt yet again, the Tigers seventh punt of the game.

The Clemson Tigers would gain two first downs, one gained on the legs of Lawrence and the other on a pass to Higgins. But on the third play of that drive, with less than five minutes to go in the game, Lawrence was attempting to run the ball.  Safety Grant Delpit hit Lawrence and forced a fumble and freshman DB Derek Stingley recovered.

LSU ran the clock out to seal the victory and it’s fourth National Championship in school history.

And The LSU defense made plays when it needed to. They kept pressure on Lawrence all night, allowing him to connect on just 18 of 37 passing for 234 yards.

Probably the biggest stat of the game: Lawrence had zero touchdown passes on college football’s biggest stage. And, he overthrew his receivers 13 times in the game. He did add 49 yards on 10 carries. LSU sacked Lawrence twice.

LSU handed Lawrence his first loss since he was in high school. His record as a college quarterback now stands at 25-1.

RB Travis Etienne had 15 carries for 78 yards. He came into the game averaging 8 yards per carry. But the LSU defense held him to an average of 5.2 yards per carry on Monday night.

Burrow was 31 of 49 for 463 yards and 5 touchdown passes. He also set the single-season record for touchdown passes with 60, surpassing the old record of 58 by Colt Brennan of Hawaii. Joe was named the Offensive Player of the Game.

RB Clyde Edwards-Helaire ran for 110 yards on 16 carries but did not score. But his hard running and making plays in space kept LSU drives alive when they needed it most.

LSU LB Patrick Queen was named the game’s Defensive Player of the Game.  He had eight tackles and 2.5 tackles for loss.

The Tigers of LSU gained 628 total yards, while Clemson gained 394.

LSU is 15-0 for the first time in school history. This team came together, played like a team of brothers. One team. One heartbeat. Absolutely.

Joe had chemistry with his receivers all season and he was the undisputed leader of this team.

And LSU simply would not quit. They entered each game this season with the mentality that they would play to win. LSU would score at every opportunity not just to gain the lead, but to increase it.

Coach Ed Orgeron always said “Play football for 60 minutes.” They started out slow in the championship game, but once they got the offense rolling they would not be denied. Burrow found open spaces in the Clemson defense and Burrow put the ball where his receivers could catch it and make plays.

And, if the pass play wasn’t open, he tucked the ball and ran for first downs to extend drives. Clemson would either have to defend the pass or account Burrow’s running ability. It began to take its toll on Clemson and they could not recover.

So, Burrow now leaves LSU with a Heisman Trophy in one hand, and a national title in the other. It was a perfect ending to a perfect season. Burrow will most certainly be the #1 pick in the NFL Draft in April. Mock drafts project him to be selected by his home state Cincinnati Bengals.

Delegating and letting his coaches “coach”

Hats off to Head Coach O and the LSU coaching staff. Orgeron delegated and let his coaches “coach.”Passing Game Coordinator Joe Brady and Offensive Coordinator Steve Ensminger called every game perfectly. The two coaches worked together as a team and were instrumental as LSU claimed it’s fourth national title in school history.

Coach O was the right man for the job when they made him the permanent head football coach at LSU in 2017. He bleeds purple and gold and is a true ambassador for the great state of Louisiana. The man has come full circle as a coach, from the coaching debacle that was Ole Miss, to being passed over for the head coaching job at USC after going 6-2 to finish that season, to now national championship-winning coach.

It was a great win for LSU, for the state of Louisiana, and for the fans.

Material for this article sourced from ESPN 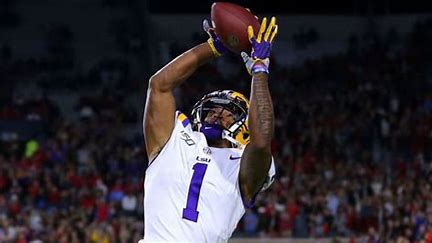