The 1999 Southern Miss football team won their third C-USA Championship with a 6-0 record, going 9-3 overall and finishing with a #14 final ranking in the AP Poll. The Golden Eagles were coached by Jeff Bower.

Southern Miss had a win against a Top 25 opponent, 39-22 over #16 East Carolina, scored 40 or more points three times and finished the season on a 4 game winning streak. 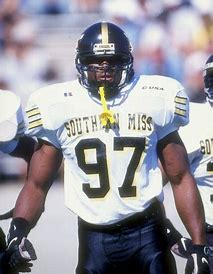 The Golden Eagles went on to play in the Liberty Bowl, beating Colorado State 23-17. Adalius Thomas was drafted in the 6th round of the 2000 NFL Draft by the Baltimore Ravens.

Next ArticleLa. Tech To Host UTSA On Senior Day